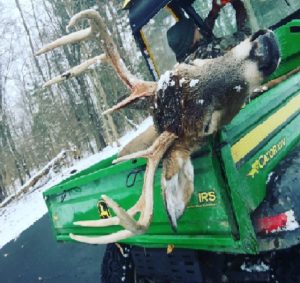 November 20th 2016. Snow storm to blow in over night bringing 2 inches within a few hours, crazy wind blowing in our face all day (perfect for our back stands) handful of “expert” level hunters telling us that we were crazy.

My buddy and I set out to prove everyone wrong.

We headed out to the stand and arrived around 630am. It was cold, snowing, and everything had frost on it.

We bundled up and we were in the stand, seen some good signs of movement on the drive in.

630am-9am we have seen nothing but some chipmunks.

Frustration isn’t the word for what we had going on, we were never going to live down the day that everyone told us we were going to waste.

At 9am we agreed that we would give it another hour or so and head in for the day.

Greg decided we were going to let out a few low grunts. 10minutes pass and nothing changed.

Look to the left of the stand, nothing.

Look to the right, there is a 8pt buck standing behind us.

Popped up on us out of nowhere, never heard him, never seen him.

I reach for my compound and ol Crazy 8 decided he was going to look up the tree at me and had me stuck in 1 spot that felt like 5 hours.

He got behind the tree as I noticed he could still see me there was no way to get a shot off without spooking him.

I let him go, not free, but I passed on the chance to take him down.

My buddy happens to shoot a Crossbow that was loaded and ready to rock.

He asked if I was going to take the shot and I declined, I look up to see him shaking like a leaf on a tree, told him to breath, calm down and take his time. At this time, he’s still walking and sniffing the ground when I see the bow ready to go but he’s not making a noise to get the buck to stop.

I let out a “errrrrppp” BAM! stopped him in his tracks, as the 10 seconds between pass it seems like hours, I am praying that he makes a good shot, that the deer doesn’t jump the string, that the wind direction doesn’t change, all these different things run through during the longest 10 seconds ever!

I watch the arrow flight path tearing through the wind, High and back…

I though for sure he missed the vitals and we would have to attempt to track this deer 200 miles to get ahold of him.