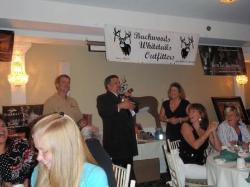 Hunt to Feed Banquet was a sell out

On Friday September 5th the Hunt to Feed program held its first awareness banquet to a sold out crowd at John J. Sullivan’s Restaurant in Ansonia, CT. This event was primarily held to raise the awareness of this program prior to the September 15th commencement of hunting season.

The Hunters for the Hungry legislation act paved the way for the launch of the Hunt to Feed program in 2006. This program provides an avenue for hunters to donate their deer harvest free of charge. It is then processed and donated to the CT Food Bank and various other non-profit organizations throughout Connecticut.

Nancy Carrington, executive director of the CT Food Bank and Kate Walton, programs director, were in attendance to show their support. Carrington addressed the crowd by providing a status of Food Bank activities and announced that, from the prior two hunting seasons, the Hunt To Feed Program has provided over 7,868 meal portions of much-needed lean and nutritious protein. One deer can feed 200 Hungry People.

Also present was Russell Cornelius, representative of the Fairfield County Deer Alliance and member of the Brookfield Lyme Disease Task Force. Russell spoke to some of the dramatic effects of deer over-population and how programs such as Hunt To Feed are a win-win situation not only the state, but also for citizens who also enjoy the outdoors, as well as homeowners who are generally afraid of contracting a debilitating tick borne disease (such as Lyme Disease) and suffering extensive damage to landscaping.

The Hunt to Feed program coincides with Connecticut’s Deer Management plan, whereby hunters are awarded replacement harvest tags as an encouragment to harvest more deer in Zones 11 and 12, including towns in Fairfield Country and all along the CT Coastline, up to the Rhode Island border.

To learn more about the Hunt to Feed program, and how to assist with deer harvest donations, offering your land for hunting purposes, or to make a donation, please contact Joe Tucker at 203-305-3874 or visit www.hunttofeed.com.