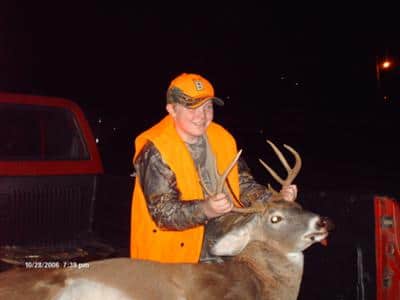 It was me and my brother in law, Wes Coleman and we woke up just about 5:00A.M. We got our camo on and we drove out to his mothers house where she owns some Missouri deer hunting land.

We set down by the pond bank where we could look out over the field.

It was cold so we stayed out there for about an hour and then we went home.

Later after we had gotten back to the house Wes’s nephew Braxton Coleman said that him and his dad hadn’t gotten anything either so he went with us and we went back out about 4:30P.M.

We went to the farm in Stover Missouri. We got out of the car and then we walked almost a mile long drive way and we started hunting in the yard because no body lives there and we thought that we would see some deer.

We walked down a trail and we saw two deer, but I could not get a shot off so we then set on the edge of a creek bed.

We set there for about maybe four hours and it started to get dark so we got up walked back up to the house and stopped to see if there may be some deer there, but there wasn’t.

So we started to walk back to the car and Wes looked down a hill and there stood a nice buck.

We could not see how many points were on the buck so I looked down through my scope and took the shot at about 152 yards.

It hit the buck in the neck and he ran about 2 yards and fell.

Wes looked at me and Braxton and then looked up at me and he said I think you hit him.

So we went down the hill and we thought it was dead, but it wasn’t, so we shot it again and then it finally died, so we went home and got the truck and took it to show some friends.