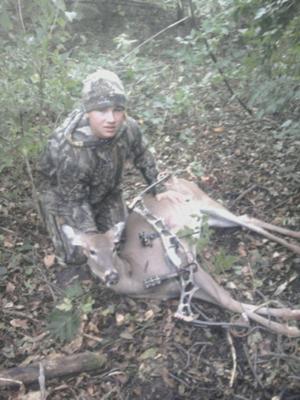 I have been hunting bow and arrow for awhile now but I could never get one until this year.

So we get to our hunting spot around 6 o’clock and I get to my stand @ 6:08. So i’m up there for around 20 minutes I’d say at the time when I see this doe coming from my right.

So I stand up and draw when it’s behind my tree and when it gets to about 12 yards I stop it saying “err” and it stops quartering away with its head behind another tree.

So I release my arrow behind the ribs and I knew it was a perfect shot.

Then I checked my phone and it was only 6:34 in the morning just after it’s legal to hunt.

When I called my dad he even said he didn’t make it to his stand yet.

I get where he is and we wait for like 9 minutes just talking, and then he says “you wanna go?” and I’m like “of course I do!” let alone it went down and up another creek the last one going up it had crawled under bushes, and it was laying dead just 30 yards ahead of where we were sitting and talking.

When we get to the deer we see that it was a perfect shot taking out the liver and the opposite side lung. and then we take a bunch of pictures and I call all my hunting buddies and tell them I won the competition this year of getting the first deer.

Then we field dress the big doe and then the test comes up we have to drag the doe 600 yds to where we can get to the truck just past a river and let me tell you it was tough, but also it was worth it.

The big doe was 135 lbs field dressed and 2 years old.

Overall I will remember this day for the rest of my life.