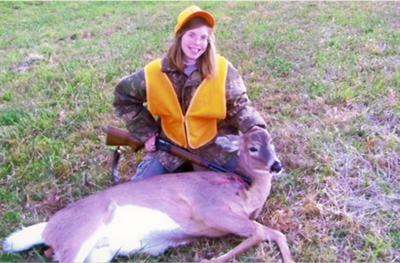 It’s often hard for my friends to understand the exact joys and “fun” of deer hunting.

I typically get the same response, the “Aww, why would you want to kill a deer?”

It must be something to do with the fact that I’m a girl, and at first glance people would not consider me as “tough.”

I have a slender, petite build, and, as my dad says, I look pretty “feminine.”

I have always liked the outdoors, and camping and fishing, so my dad taught me some things about guns and the outdoors.

I also went to a camp when I was around ten years old, and learned about archery and using BB guns.

So when I got back from camp, my dad decided it was time to take me deer hunting.

My dad must have picked the coldest day of the year to go out, or at least it seemed that way to a young teen.

I wore four pairs of socks and my dad’s boots to keep my feet warm, along with a bunch of layers of clothes.

We sat there for what seemed like forever, just waiting for the deer.

I was really fidgety, and it was then that I realized exactly how hard it was to keep still.

Eventually we saw a few deer, but they were too far away to shoot at.

There were more days like that over the next few years, but it became a tradition for dad and me to go each and every year.

So on my third year of college over Thanksgiving weekend, it was no different.

I went with dad down to our farm in Owen County.

We unpacked our bags, loaded the guns, and headed out to the deer stand.

The wind was moving toward us, as we settled in the stand to wait.

We sat patiently for hours.

Finally, I heard a rustle through the trees, but when I looked, there wasn’t anything there.

But then I looked again and saw two deer out in the far field.

My dad had to ask where they were, and only saw them when I pointed them out to him.

I saw the little one walk through a clearing, and I aimed and shot.

The little deer ran, and I waited to see if it would fall, but I missed, and it was still in the brush.

The bigger doe was still out in the field.

I waited for a clearing and shot again, this time at the big doe.

She ran, as I missed, the shot was too far.

She ran toward us, into a closer field.

And then my dad whistled at her, making her stop and look.

As he got her attention, I raised my gun and aimed.

This time I shot her right in the heart.

She walked in circles and eventually dropped.

It was then that I noticed that my body was shaking with excitement.

My dad showed me how to gut the deer, and then we took pictures.

I held that doe’s head and grinned, proud as hell.

We then hauled the thing in the back of the truck on pure adrenaline, and shared Smirnoffs to celebrate.

My dad smiled at me, proud, and called his buddies to tell them about it, as I called mine.

That deer was my right of passage.

I now understood the secret relationship my dad and his deer-hunting buddies had with the wild.

In fact, deer hunting is not about killing deer at all, but about the bond…something only understood by hunters.