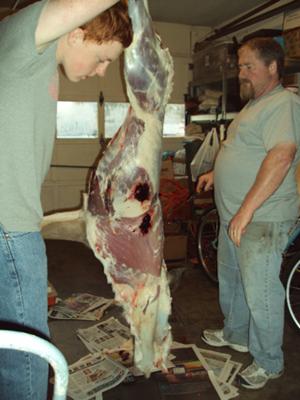 Hunting public land can be frustrating but persistence and patience can pay off.

My son and I planned a week of hunting and opening day was not the way to start. A lot of hunters and other seasons overlapping and start on the same day.

We had scouted out some areas and got in early, only to see other hunters there hunting the same areas.

We moved a little to adjust and thought we were set, well that changed when a group came in with 8 dogs and started hunting rabbit in the woods where we were.

They ran up and down several sections of woods from morning till close and we just couldn’t get away.

With no hunting the next day, can’t hunt Sunday’s in Va. We went to the range in the next town over.

They have a free range to use.

We had the range times wrong, it didn’t open till 1. Since it was only 10 my son said lets scout around and see whats out there.

He saw a field down the hill and wanted to go see what was planted there.

We got down there and wow…out in the middle of the field was a nice big buck. My son said we are hunting here tomorrow.

So after sighting in we went back to our camp and got set up for the next day.

The next morning we went in and set up off the same field.

At about 9am and no deer we relocated a bit.

I had three doe come threw between 10 and 11 and just after them a small spike buck chasing there scent like a crazy man.

My son didn’t see anything till 30 min before close and then a doe and two little ones came right out of the thicket.

Just behind them another big doe came out.

My son said this is it and set up for the shot.

He saw his window and let out a little grunt to get her to stop.

She stopped with a branch right in the way of the sweet spot.

But she was quartering away and he shot just back of the sweet spot. She ran about 30 yards and dropped.

By the time I got there he had got out of his tree and dragged her out of the thicket to the fields edge.

We dressed her and set up for the mile back to the truck.

I still get so pumped when my son get’s one.

It made the trip complete.