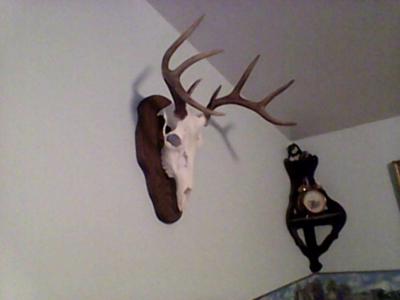 I had the nice eight point European mounted by Spent Arrow Taxidermy in La Crescent MN. Did a great job on it too!

Hi, I’m Darryl and this is a story of my most tense deer hunt to date. It was the middle of the first 2014 firearms season in southeastern Minnesota.

I pulled up to the edge of the cornfield that wrapped the woods where I would be hunting that evening.

A light snow was falling, which dusted the ground and was just enough to make deer clearly visible.

A small group of does fed peacefully in the cornfield as I got out of my vehicle and uncased my Mossberg 500.

It was 3:30 and I had just gotten off work, as I rushed to get into the woods early enough to have a shot at tagging a nice whitetail buck.

I had been fortunate enough to harvest a doe on the first evening of the season earlier in the week, and now I was out to fill my buck tag.

I walked around the edge of the cut cornfield so as to not spook the does, who watched me enter the woods.

I walked down an old logging trail into a bowl at the bottom of the small creek bottoms where I would be hunting. I found my spot behind a large oak tree with brush piles on both sides, giving me a clear line of sight all along the woods and up and down the bean field my spot overlooked.

I sat on a small folding chair and waited for the sky to begin to darken.

After about a half hour a whitetail doe came meandering down the muddy deer trail that emptied into the bean field. She proceeded to nibble on the still-green leaves of buck thorn.

I knew that she had a fawn from observing her the previous nights, but it was not with her this time.

Anyhow, I had no intention of taking her, though she would be a good meat doe. I wanted to save my buck tag for now.

At this point, the wind swirled, and she may have picked up my scent, backing into the woods and trotting off. I figured this wind could be trouble later on in the hunt.

Over the course of the next hour I saw little activity, and figured if I continued to see nothing, I would leave early and try to sneak up on the cut cornfield as I knew there would be deer in it.

Just as I was about to leave around five minutes to five O’ clock, I heard a deer crashing through the marsh grass behind the creek immediately behind me.

I tried to remain still, and slowly turned my head, to see two whitetail does crossing the creek no more than five yards to my left. They came up the bank, and proceeded to walk right in front of me, getting as close as three yards at one point.

I have no idea to this day how the wind was able to change direction at the last second, and how the deer didn’t see me even though I was at ground level sitting half behind a tree, but they never noticed me.

I later found out why.

They were so close I could hear their raspy breathing, like they had been running a long time.

Before I could put two and two together, they spooked, and ran out further into the bean field and stopped, looking over their shoulder.

Had they seen me? I thought.

Just then, I caught a blur of movement to my right. I looked, and saw a nice eight point buck trotting out into the open. What happened next was almost an instinctual response.

I smoothly went right for my Mossberg 500 which was resting against the bark of the oak and brought it to my shoulder.

I mouth grunted to stop him, and he abruptly stopped broadside, fifty yards, staring right at me.

I lined the 4x reticle behind his shoulder and squeezed off a shot.

Orange flame leapt from the muzzle and my ears rang. I saw the buck hunker and take off into the bean field.

I racked the pump and tried to get back on him in case he gave me a follow up shot, but as I later found out the ol’ 500 was dead on, and he was running with no heart.

The old boy tipped over at the edge of the field and lowered his head to the snow, his fight gone.

I caught my breath and gave him five minutes before approaching, kneeling down and thanking God for a successful hunt, and zip tying my tag on his right antler.

In a time when store bought meat is at least $5.00 a pound, I am grateful to have fresh venison in my freezer after this deer season, which is why deer hunting is as important now as ever.

Thanks for reading and keep on hunting!