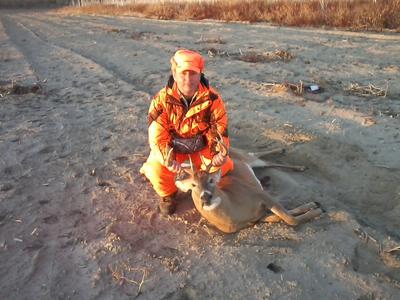 After about a 20 year absence from hunting out west, I opted to try again. I had been to Colorado for both deer and elk before, but that was out because of both the draw and pricing.

I opted for Nebraska.

Early in 2010 I posted a few ads in the CL sporting section looking for a place to hunt in NE. A rancher called and offered us both property and a place to sleep at his ranch for a nominal $600 fee. So we were all set to go to a place called Bristow, Nebraska.

I took the trip there with a couple of local guys and quickly realized that I should have chosen other traveling companions.

They both drank excessively and were quite vocal. Oh well, I wasn’t about to let that ruin my trip.

The first morning arrived and I found myself on the brush draw end side of 1800 acres of corn stubble. Now whereas I had arrived at my position about 5 minutes after first light, I soon realized that I was a bit late.

About 30 head of Whitetail came pouring off of the corn stubble and headed to the deep brush choked draws at the end of the field. It is extremely difficult to pick out a buck from a trotting group of 30 or so deer.

I spent the rest of that day prowling the corn stubble and actually saw some smaller bucks chasing does.

That evening brought more sightings , but nothing that I was willing to take.

Day 2 found me awakening my hunting partners from a long night of bourbon drinking.

I thought I would never get to the end of the field soon enough that morning.

As luck would have it I got there while it was still dark and at first sunlight saw about 40 deer come pouring off of the field.

Although the rut was on they did not pause long enough for me to make a selection out of the 10 different bucks that I saw.

That evening as the sun was setting I saw a glistening rack approaching along the fence row towards me. At about 50 yards the buck approached the fence, jumped the fence and began to chase a doe that I had not seen.

At about 100 yards he did a broadside number and I anchored him right there.

Well I have since changed hunting areas and hunting partners.

This will be my 5th season in Nebraska and I have taken a decent buck every year.

If I can post I will post 2 pics of me and my son with a WT and a MD from last year.