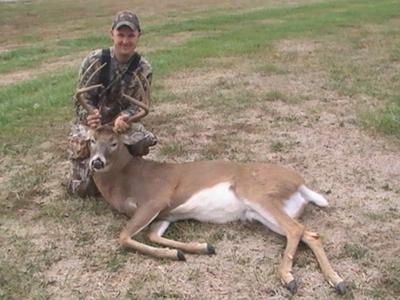 After a week of hunting this nice buck, my father and I had decided someone else must have taking him, so we moved on to our next spot where my brother-in-law Travis and myself loaded up on some does opening weekend.

When my dad showed up at the house early for coffee and talk of hunting we did thoughout the week, we just new Travis would bag the nice buck we had seen on our scouting cam a week before season.

Travis is one of those hunters that could shoot a deer from his living room with a sling shot and kill it, he is a hunting machine.

When my cell phone rang that morning in my stand, and I seen the screen with his name, I knew it was over for this nice 8 point 170 lbs buck.

When we all walked up the hill to see what he had killed, we stood there a minute in amazement that the deer was still around and had finally showed himself.

This is the best deer my brother-in-law has ever taken and we’re glad he got him, but next year we’re keeping his bullets away from him.