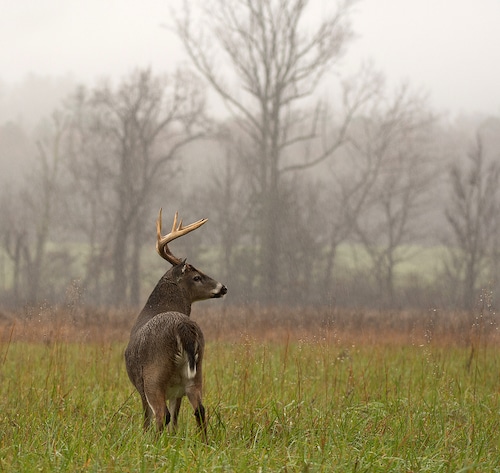 OCT 11 2011, I had been looking forward to the opening day of deer hunting for months. As the day approached I checked the weather channel to see what the weather would be hoping for bright clear skies but what they weather prediction was 60-70% showers overcast with a high in the 60s.

It looked like I was going to be deer hunting in the rain.

With this knowledge nugget I hoped for best and planned for the worst. I purchased a tree stand umbrella. The weather forecasters were correct, the early morning brought rainy skies but there was a chance of it being on and off showers throughout the day.

Armed with my wet weather gear and the stand umbrella I ventured out. Traveling down the dark twisting wet road through Sumter National forest I saw only 2 trucks pulled over on the side of the road.

It looked like only the diehards were out on a this opening day morning .

I arrived at the hunt club and it was still dark . The mist that I dealt with during the travel down picked up and made a tapping sound against the car.

I slowly got dressed in the balance of my hunt clothes and waited for the rain to let up a little.

It finally slowed enough for me to take a chance. I went to my favorite stand . The wind direction made this stand a poor choice but it was the easiest to get to into with a minimum of disturbances and I felt the rain would decrease wind blown scent.

It is surprising how quiet the woods were due to the rain, no birds no squirrels nothing but the patter of rain dripping off leaves and splashing to the forest floor with a soft plop.

I moved quietly through the woods and quickly got about the business of hooking in my climber. I slowly ascended the tree installed the rain umbrella and pulled up my rifle.

I was as snug as a bug in a rug. Bugs in rugs will get wet if there is enough moisture and there was plenty of it. It was a slow soft shower but I was not getting any dryer slowly and surly I was getting wetter and wetter.

Time slows down when sitting in a deer stand and the rain seemed to make time move slower. The warmth created by the exertion of the climb began to ebb and the cold began to creep into my muscles this was soon followed by a wave of tiredness.

I shut my eyes for a moment to fight of fatigue. When I opened my eyes I saw the hind quarters of deer disappear behind a pine tree. It soon reappeared in a open space between more tree branches.

I glimpsed antlers through my scoped rifle before the deer was hidden by more trees. I anticipated its next move into the next clearing. As soon as the buck’s shoulder was exposed I pulled the trigger.

The deer dropped to the ground hidden by the tall grass .

After the shot I took a bearing with my compass to establish a line to the deer.

Once on the ground I needed the bearing so as not to wander about aimlessly.

At about 70 yards among the tall wet grass I found a 6 point buck.

I was able to drag the deer close to the road and was determined to do something I never did before , field dress a deer.

It was with some apprehension when I started this process. I had seen it done on You Tube and had helped dress out a deer last year.

This time it was different.

No one to assist no one to advise. Having the right tools helps and fortunately I had them 2 sharp knives, one with a specialty skinning tool and long sleeves gloves.

With a few false starts and some squeamish scooping I was finally able to do the job.

I put the deer in the trunk of my daughters car fortunately I had brought a bunch of plastic sheeting for such an instance. After the trunk was closed it was off to the processor.

The most important take away of this opening day adventure was having the right equipment makes a difference, rain gear, safety vest, compass, tow rope, gloves, plastic sheeting etc.

It was very rewarding to hang tough and get a deer