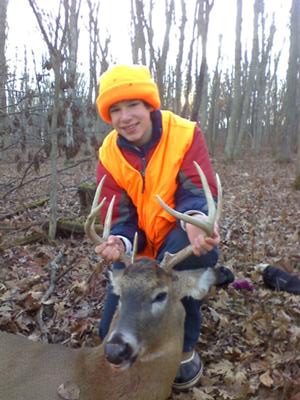 It had been a frustrating 2010 gun season in Wisconsin. I had been hoping to get a nice deer that year because the previous year I hadn’t even taken a shot at anything.

After hunting for five days with my dad, (I’m 14 btw)and not seeing a single thing, I began thinking that this year might be the same as last year.

My 18 year old brother, Seth had harvested a nice little 8 pointer that year, and I was happy about that, but I really wanted to get something myself.

Then things started to pick up 6 days after opening. Friday. It was evening, and I had been waiting out there for about 4 hours, and finally a big doe came over the hill, right up to my stand.

I was so nervous and exited that when I got it in my scope, I was impatient and jerked the trigger and missed it. I was very disappointed.

The next morning, I really didn’t feel like getting up. I didn’t expect to get anything after such a slow season. But I got up anyway. So my Dad and I made our trek through the woods out to the hunting stand.

After about 45 minutes outside, my Dad thought that he heard something.

My Dad looked in the direction, but didn’t see anything. Then, I saw the body of a deer moving through the woods about 80 yards away.

“Dad Dad! There’s a deer out there! Look!” I whispered in an exited voice.

After watching the deer for about 60 seconds, through the brush and trees, I saw that it had antlers!

Adrenaline rushed through my body as I got him in my sights.

Then, I took the shot.

The buck ran behind some thicker brush, and out of sight. But the does that were with him didn’t run off.

After waiting for about 3 minutes, I was almost sure that I had hit him. My dad thought so too.

Then, all of the sudden there he was walking out of his hiding place. It turned out, I hadn’t hit him.

I raised my gun for a second shot.

He was at about 60 yards and facing me. Even though he was facing me, I still thought that I could hit him. So I fired. But I regretted not waiting for a better shot.

As fast as I had taken the shot, the deer were gone.

Every one of them.

After waiting for about 5 more minutes, I saw a little doe. She stopped and I took the shot. She dropped immediately.

My Dad suggested that we look for the buck.

Then we found some blood. A heavy trail.

I was almost sure that it would lead to the doe.

My Dad said, “You follow it this way, and I’ll follow it that way.” So I followed it. Then the blood trail stopped. “This is were I shot her,” I thought to myself.

But then my dad said, “Hey buddy, look over here!”

For there lay my seven point buck!

I was so happy!

I couldn’t believe it!

I hit him when he was facing me, and got him right through the heart. 😀 (and it was bigger than my brother’s eight point. Na na na na na!)

So we gutted our deer and got them home.

My family was so happy to see that I had gotten a deer.

And they were thankful for the venison too!

And to make the season even better, a few weeks later in does only season I got another deer.

WHAT A GREAT SEASON!