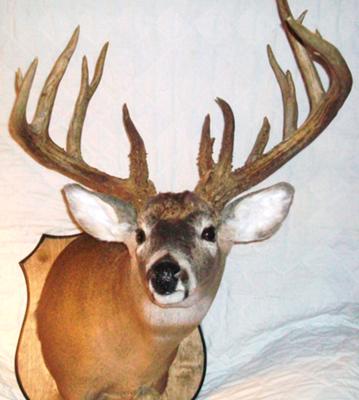 I’ve been a die hard compound bow hunter for 29yrs but, due to shoulder replacement surgery on July 26, 2010 I thought my 2010 deer season would be lost.

But after talking it over with my Surgeon he gave me the OK to use a crossbow, which I have never owned nor even fired.

After a lot of thought and the yearning to hunt the 2010 season I would give it a try.

I purchased a new crossbow and obtained the proper paper work provided by the state of Kentucky to be able to hunt with a crossbow during the regular bow season and boy am I glad I did.

I have killed 60 or 70 deer with a compound bow and another 30 or so with firearms.

But I had no idea of what I would have the opportunity to see much less what was coming by my stand on November 2, 2010.

It was the biggest deer I had ever seen. He was moving pretty fast as he approached my stand, but not an all out run.

I was unable to stop him when I attempted a moving 15 yardd shot as he passed by my stand.

I knew right away I had hit this giant deer but was unsure of how well.

It was not until about noon the next day after hours of blood trailing and several prayers I realized I was not going to recover this deer of a life time.

I can remember returning home early afternoon as sick to my stomach as I’ve ever been.

For the rest of that day and for the next two, I was as miserable as I have ever been.

I knew I had let the deer of my dreams slip through my fingers.

The next three days I played that shot over and over in my mind and I believe that I would take that same shot again given the chance.

After three days of self pity and making everyone around me miserable I thought that I would give up hunting all together.

I went to bed on Friday night really tired from three nights of not much sleep, but this night seemed a little different the pain of the lost trophy had eased a bit and thoughts of the rut that magical time of the year to a deer hunter were creeping back into my mind.

Just before going to sleep that night I thanked God for all his blessings on me and my loved ones as I do every night. But For some reason this night seemed different.

I felt a wonderful feeling of calmness come over me and I knew then that I had to get up the next morning and return to that ridge that had been so good to me over the years during the rut.

I got out of bed around 4:30 the next morning pretty well rested even though I woke up seven or eight times that night with thoughts of the giant buck and praying that he was still out there somewhere.

I arrived at my stand that morning about 30 minutes before daylight as I always try to do.

I then got into my climbing stand and went up the tree to about 20ft. I have always had pretty good success when about that height.

When it started getting light enough that morning I started looking at the shooting lane where I had taken the shot at the giant deer on Tuesday evening.

I remember praying over and over that morning, God if that deer is still alive could I please have one more chance at him.

I started calling that morning as soon as it was light. I was rattling, grunting and using a primos can about every ten or fifteen minutes.

Then around 8 am that morning I had a small racked buck come to within about 75 or 80 yds.

I had made up my mind to take him if he would come another 40yds, but that was as close as he would come before he turned over the ridge and disappeared.

I usually try to stay in my stand until at least 10:00am. I remember checking the time on my cell phone that morning it was 9:20am.

I thought I would try another two or three rattling sequences and then call it a morning.

It could not have been more than five or ten minutes after hanging up my rattling horns when I started hearing what I was 99% sure was a deer walking.

It was just over the ridge and out of my sight.

I was positive that I had a deer coming so I stood and shouldered my crossbow.

It was two or three minutes until the deer I was hearing topped the ridge and it was a big mature doe.

I knew there was a second deer following the doe and I knew because of the time of year there was a good chance it could be a buck.

The doe kept coming until she was directly under my stand and stopped. I then turned my attention back to the second deer and that’s when I nearly fell out of my stand.

The shooting lane that I had looked at a thousand times that morning the same one where I had shot the giant deer Tuesday afternoon was once again filled with a giant deer.

I immediately let my 20yd sight settle just behind his front shoulder and began to squeeze the trigger but nothing happened. I was about to panic when I realized I hadn’t released the safety.

As calmly as I possibly could stay I released the safety and began squeezing the trigger once again.

This time the 20″ bolt left the bow and appeared to have hit the deer solidly just behind the front leg.

The big deer turned and went back across the ridge and disappeared down the same trail he had appeared on.

After the shot I set down and thanked God and tried to calm down enough to call my wife on my cell phone.

When she answered I said your not going to believe what I’ve done.

She said you better not have hurt that new shoulder and I told her I have shot another giant deer.

She gave me a few warnings about not dragging, tugging or lifting on a deer and taking a chance of hurting myself, and after I assured her I wouldn’t I hung up.

I then called on three of my hunting buddies who had told me earlier that if I got the OK to hunt and lucky enough to shoot a deer to give them a call and they would come and help me get him out.

I nervously waited for them to show up and after about an hour and half of tracking we found the giant deer and there was no ground shrinkage.

I walked up close enough to see the massive horns sticking well above the ground, I just sat down about 25 or 30 feet away and thanked God again for allowing me to harvest yet another one of these wonderful creatures and for letting it be this giant deer.

Celebrating with a few high fives and congratulations and I am not ashamed to say a few tears on my part it was time to field dress my trophy.

That was when I turned the big deer over and got another surprise.

He had a fresh wound just in front of his front leg there was no doubt a broad head had passed through the deers brisket and nicked his right front leg.

At this time there was no doubt in my mind this was the same deer I had shot from the same stand Tuesday evening.

I will never forget this the first week of November 2010 and the emotional roller coaster ride I was on that week.

I would like to thank God once more for his blessings on me and for all the things he has put here on earth for us to enjoy.

If you don’t hunt and fish you don’t know what your missing.

I have been notified that this is a: