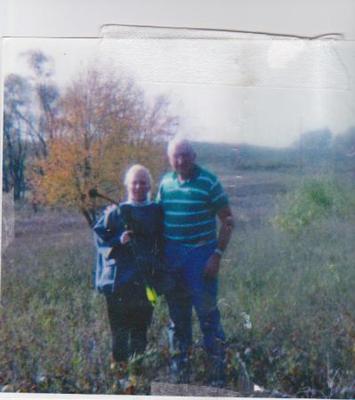 The Chance Of A Life Long Memory

Dedicated: With Love To My Dad

When I sat down to write this story, I never imagined how clear the memory would be until I began.

My father and I have always been close through out my years of growing up, mainly on the ballfields. We ate, slept and lived softball.

As I grew older into my late 20’s, I decided to experience a new sport – Deer Hunting.

Dad always deer hunted since I could remember, so I decided in Spring of 1994 to take up the sport with dad to see what a new challenge I could face.

My first year was a depressing one for myself; I was unable to even see a tail running past my aim. Unlike my twin sister, who snagged her first buck early that opening morning.

The following year seemed to follow in the same path, although I was able to see the deer, not having a doe permit made chances a little bit less for myself of getting a kill.

As for last year, the best year of my life! It started out, as usual, no sleep that night from being too overwhelmed by the excitement and challenge of the following day.

We left the house around 4 a.m. and drove for an hour and a half. On the way to the property that we hunt, we had to stop in a little town.

Sure, maybe a lot of people think for a cup of coffee, a doughnut, and a bathroom stop… No, not us, we had to stop and let this big, trophy winning, at least 9-point buck, cross the street.

If that buck wasn’t laughing his tail off at us, I would be surprised!

After all the excitement, I took that little episode as a “good” omen.

We arrived at the property in the blackened morning. The coldness was so crisp, I felt as though I would never get warm even with all the layers of flannels and long underwear I had on.

As we started down the hill, all you could hear was the coldness crunching in the grass. Almost as if someone was rattling a potato chip bag.

My twin went off into her blind, way in the back, and dad and I took a sharp right towards mine.

After arriving in my little homemade fort for the day, dad decided to see what he could rustle up for me.

So, there I was, scared half out of my mind, thinking as if the trees were moving, and wondering if someone was out there staring back at me.

All of a sudden, I creeped down to take a glove off, and I looked up. There she was.

A beautiful doe, but the thing I couldn’t figure out was, where did she come from without even making a branch snap?

I all of a sudden started to shake uncontrollably; I have heard that is what happens when you have a deer in your sight. Her behind was to me, so I would have to wait to take a shot.

Luckily, I had a doe permit with me this year.

One thing dad told me before he left me earlier that morning was never to stand up or make a quick sudden movement.

As she was fixin on what to eat that morning, I raised my 16 gauge shot gun up and looked through my sight.

If she would only turn a little bit more, I could try a shot.

Only one thing happened unexpectedly as she turned, she looked me right in the face.

We were eye to eye; as if she knew what I had planned for her, it seemed like forever!

We just looked at each other, then all of sudden I told her “Go on, get out of here, go on!!”

Within a flash, she was gone. I don’t know why I did such a thing, but in the end I am glad I did.

Shortly after this strange occurrence, my father came back. I sat down and told him the whole story. Of course he was a little disappointed in me, but he was sure I would see more that day.

Dad decided to sit with me a little while to see what may come walking by.

He decided to eat a sandwich and drink some coffee. So, I figured no better time than the present.

As we were sitting there in the early winter’s morning talking to one another, I was telling dad of my fears of shooting something that is alive…

Dad tried to boost my confidence, but I was pretty much ready to go home and call it a day.

Then all in a matter of 5 minutes, I saw this huge, beautiful doe walking down a hill with her two fawns trailing behind her, right over my father’s head.

He didn’t know what they were, they could have been 3 bears, coyotes for all that he knew.

Dad couldn’t turn around for the fear of scaring them off. He told me to get my gun, aim and take a shot.

I had to put down the coffee and grab the gun, which I did. They didn’t even hear us and we were talking in a pretty normal tone of voice.

By that time, I was telling dad “there is no way I can shoot, I am shaking like a leaf!” Dad grabbed my arm and asked, “Are you ok, what’s wrong, Laura?” I think he might of thought I was having a heart attack or something.

I then thought to myself, “Laura, it is now or never, and dad is right by you, think how proud he would be to be with you for your first deer!”

I got my strength up, put the gun up at the right level, took a deep breath and waited for her to walk just a few more steps for a clearer shot.

Within less than a minute, she fell down to the ground.

My aim was right for her neck; I wouldn’t know until later that my aim was perfect with a one shot kill.

The flood of excitement is still unspeakable!

Not exactly for the kill, but for my father being with me for my first deer.

I started screaming from the top of my lungs, “ Dad, I got a deer!”

He gave me a big hug and we both laid down our guns and walked about 40 yards away to see my trophy for the year.

Dad just couldn’t get over the fact of me actually shooting her, and how the shot alone was the kill shot.

If I close my eyes, I can still see his face after the shot… To this day, dad will always ask me, “Laura, can you still see her falling down to the ground?”

I reply, “Yes, dad,” but what he doesn’t know, every time I am asked about opening day, November 15, 1995, I think of my father’s face, and the biggest smile that will last a lifetime!