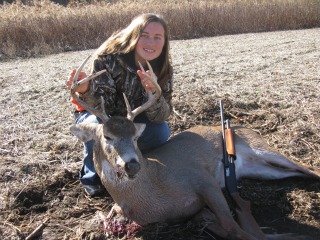 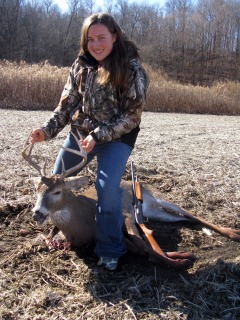 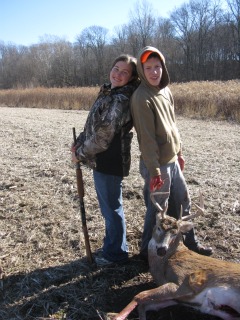 It was my first year out. I hardly knew what to expect.

In the woods I heard the shots as my three brothers and Dad each got a deer but the deer seemed to be avoiding me.

Maybe the idea of me hunting was a mistake, I thought.

More days passed, then two days before Thanksgiving after taking my morning shower, my brother Samuel, saw a large six point buck in the front field.

Grabbing my Dad’s muzzle loader, I reluctantly agreed to circle the field with him to get closer to the deer.

Skirting our 400 acres by a field is Flat Rock River.

Through the cover of trees and bushes along the river bank we crept.

In the distance we saw the buck again but soon he moved off after his doe. Walking and stopping we moved in his general direction.

Then we set for 45 minutes waiting and freezing.

Continuing on, to warm up, we hoped we would meet him coming towards us. A couple yards ahead I saw tines move. T

hough earlier I thought I had seen these tines, Samuel convinced me that it was only a bush.

It was another buck.

We had to come up with a plan.

Samuel said he would yell and I should shoot the buck when he stood up.

With gun ready, I whispered ready.

Up the buck bolted facing us looking intently trying to find us.

For the longest moments of Samuel’s life I aimed and aimed.

“Shoot it, shoot it,” Samuel whispered.

I did not hear my shot but Samuel’s ears were ringing and he was shaking.

Away the buck ran across the river.

Samuel had the buck fever that I was suppose to get and grabbed my gun away. Weird!

Without ammo I wondered what help a gun would be to him.

I actually thought I had missed the deer especially after seeing the lack of blood in his bed but after crossing the river we saw the beginnings of a blood trail.

To make a long story short, later Samuel accidentally jumped him, and though he ran, he died about a mile later.

He was a large 8 point buck!

I was so thankful to be able to share this experience with my younger brother since he was the one who encouraged me to hunt and even bought me my camos.

Next year Samuel hopes to get the original buck we were after.

Until then, God Bless and keep hunting!