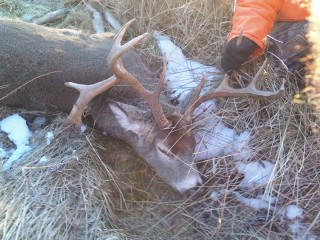 On the morning of December 5, 2008, my dad took off work while I took off school.

We went over to a family property of our uncles and cousins.

It was known for some big bucks.

My cousin was in his “Todd Mahal” stand as we call it.

He was waiting for us to go to his stand so he could go back to his house and put his son on the bus.

When we arrived, we were going to walk up the edge of the field but he told us to come up through the woods to see if we can kick something up to him.

Sure enough 75 yards in front of us we hear BANG!

He shot the monster that he’s missed the past 3 rifle seasons.

He has been keeping tabs on him for years from missing in rifle to trail cams.

The deer ran to the bottom of the fields about 300 yards.

He gets on the four wheeler and rides down to the bottom of the field and gets off and sees the buck standing in golden rod.

All he could see was the neck so he took a shot and luckily, it dropped there.

When we approached, it was still breathing so we shot it again with my dads rifle, 30-06 760 gamemaster.

And it was all cheers from there.

This buck was a fighter.

He has been missed in archery season by a friend of ours, shot in the foot that rifle season, missed in muzzleloader by my dad and missed by our cousins for the past 3 years.

Me and my dad stayed out that day and did not see nothing.

We went back to my cousins and there were people there looking at the buck all day.

I killed my first deer out of that exact stand out of the exact place the monster came out of. 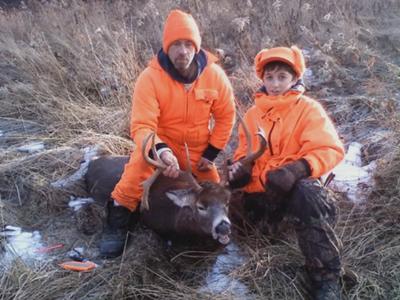 Here is a picture of me and my cousin.

My cousin on the left and me on the right.