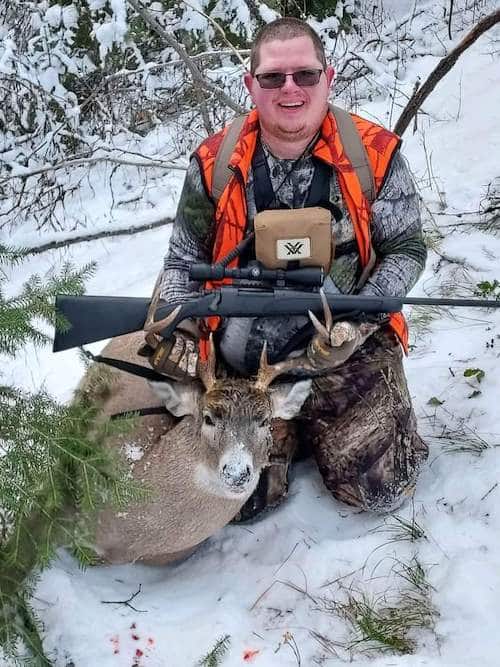 So I live in Montana in a little town just a short distance from Idaho. I finally at 37 shot my first buck in Montana and man is a big boy!

I have been hunting since I was 9 but had to stop hunting when I joined the military in 2005 at age 20. Well with military being my focus I did not get back home to go hunting!

Well in 2008 I married a woman from Montana. Well I went hunting twice before I left the military in 2013.

I tried college from 2014-2019 then I decided to stop attending college!

I got out once or twice after I left college but did not have the ability to go hunting as military left me with PTSD and Narcolepsy!

Well earlier this year I learned about First Hunt Foundation and got a sponsor to help me get my son into hunting and as a result I got a hunting partner.

Well my son got selected for a hunt in Dupuyer Montana, where he successfully harvested his first buck from after missing a doe earlier that day!

Well a few weeks later I was out hunting and harvested my first buck!

After 27 years I finally shot a deer. Although I didn’t fill my elk tag, I finally filled my first of many deer tags to come!