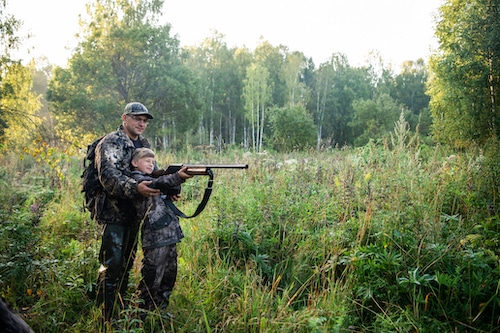 I’ve been hunting deer since before I knew it. At 5 yrs old I remember waiting for word of my fathers return from his hunting trip to Vermont.

When he finally pulled into the driveway with a buck on the roof of the station wagon I would leap with joy and run around the house yelling for everyone to come out and see.

As he recounted the hunt I would visualize it all and anxiously await the day when I was old enough to hunt.

My dad hunted with a 300. Savage. He bought it brand new after the Korean War for $52 dollars.

I remember watching him clean and oil it and he let me hold it.

It was heavy for me as I was too young to appreciate the quality firearm it was.

Once I reached my tenth birthday I finally had my chance to hunt with it. I didn’t get a deer but it was the time of my life.

He only let me use it that one day. I was young and he felt it better for me to carry a shotgun with buckshot.

Spending time at camp with my father was what I looked forward to season after season.

When I graduated from high school I joined the Army and I did not hunt with him again until eight years later.

Over the course of the next fourteen years we hunted together and I shot some bucks in that time. They were mostly young bucks but I took pride in all of them.

In 2003 I deployed to Kuwait for Operation Enduring Freedom but still made it back for the November hunt.

It was then my father had been diagnosed with liver cancer.

He fought it for another year. By October the following year he was bed ridden and slept a lot.

I had a hunting trip to New Hampshire planned and before I left I woke my father up to tell him goodbye.

He opened his eyes and I stated I was going to shoot a big buck, his eyes opened up even wider in the thought of it.

That was the last time we spoke of hunting.

My father passed away three days later. Hunting wasn’t the same for the next three years.

During that time my mother gave me his rifle and I took it with me to New Hampshire that year.

As I was sitting on stand day dreaming of our past hunting seasons together, I heard a twig snap.

I broke free of the memories and noticed movement to my right. It was the flicker of ear that I saw.

I pulled up my rifle and looked through the scope. There, antler, a shooter by all means, but no shot.

The buck disappeared for a minute or two. He stepped behind a big maple and was hidden. My heart started to pound and my breathing became erratic.

But then I heard my father’s voice from when I was a boy, “calm down, control your breathing”.

Once I regained control I brought the rifle back up and leaned over to the right and there that buck was, looking right at me. It was now or never so I shot him in the neck.

That buck dropped in his tracks.

I ran down to the buck and I knew it was a good shot. That 300 Savage went through and took out his carotid artery.

I walked back to where I was when I shot and collected my pack.

When I returned to my buck he was done and it was then when it hit me.

My dad was there looking over me and sharing the hunt again.

It was the largest deer I shot, a seven pointer that weighed 186 lbs.

I shot it with my fathers rifle.