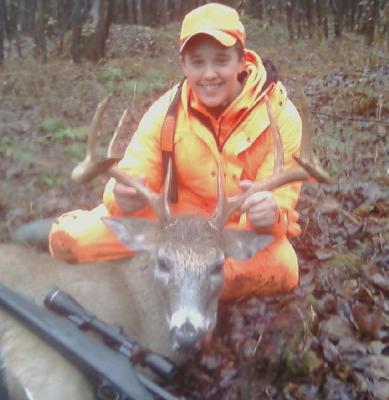 Right after we found him!!

On the first day of the Pennsylvania deer season, my dad would always hunt one specific draw. This draw epitomizes most of the Allegheny National Forest.

When I was 12 years old my dad took me to this draw to hunt with him.

Every year he would take me with him to hunt the opening day.

When I turned 16 years old I was able to hunt alone.

My dad told me that I could stay and hunt in his draw, and he would hunt about 200 yards away from me overlooking a large bench.

In the prior four years I was not lucky enough to take a deer in that draw with him by my side, but many helpful lessons were learned, and memories were made.

On the first day of deer season, we walked in together, and he led me to the draw. When we arrived I set my stuff down and he told me good luck and be safe, and he went on his way to his stand site.

I put my tree stand on the tree and climbed up to a comfortable height. I pulled my gun up and got settled in for what I thought was going to be a long day.

I sat and listened to the surrounding shots hoping that I would get a shot at one.

At around 8:50, I decided I had to go to the bathroom. So I stood up and started going over the edge of my tree stand.

Just as I started going I looked to my left and saw a big buck running up through the draw!

I picked up my .270 and stopped the buck in his tracks by bleating at him with my mouth.

He took off to the top of the draw where I saw him stumble.

I sat back down in my stand to collect my thoughts when my dad got on the radio. He said,”whats going on son?” I told him that I just shot the biggest buck of my life. (that was an easy task since I have never killed one.)

I meant to say that it was the biggest buck I had ever seen.

I unloaded my gun and started climbing down the tree when I spotted my dad running up the draw.

When I got to the ground, I walked over to were the deer was and found hair and a little blood.

As we followed the tracks, the deer did not really bleed that much.

This made me worry that I did not put a good hit on the deer.

Just as we crested over the top of the hill, my dad said something that I will never forget…”there’s your buck son!!!”

It took me everything I had not to just run up to him.

The buck was a heavy bodied 9 point that was very wide.

From here the work began.

What a great hunt and a great day.

A lot of memories were made on top of that ridge that morning.

We took our time dragging him out.

As we got to the truck, we had a bottle of water and reflected on the hunt.

My dad nearly fell over laughing when I told him my story.

We took him back to camp and had lunch.

After eating our lunch we hung the deer up on the camps Meat Pole.

My dad headed out to hunt the rest of the day.

No one else got a deer that day, but all the guys hunted hard.

Everyone couldn’t wait to see my deer.

People from the surrounding camps came to see it and congratulate me on my harvest.

We later took the buck to the Kane Annual Big Buck Contest.

Many big bucks were present, and mine competed with all of them.

It turned out that my buck was the heaviest buck there weighing in at 175 pounds dressed out.

I got to share this day with my dad, my uncle, my cousin, and a family friend.

What a great ending to one of the greatest day of my life.

When we arrived to the taxidermist to pick up the deer, he told us that the buck was 6 1/2.

He says its amazing that this deer survived this long on public land.

That is the story behind my first buck. 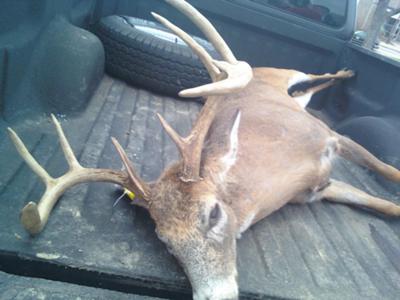