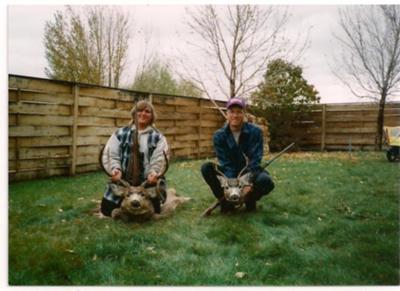 I was 20 yrs old when I killed my first Mule Deer Buck.

I was born and raised in Lander, WY and hunted deer since I was 14.

I hunted with my dad through the first 4 yrs of my hunting experience.

I left work that Thursday evening. Friday morning my friend Butch and I went to sight my rifle in before deer season came in. We got it close enough to hit a kill zone at 100 yards one inch group.

The first five days we hunted and hadn’t seen no bucks.

The sixth day he called me at home after he got off work and asked if i wanted to go on a evening hunt.

I got my gear ready.

When we left he went up the Loop Road above Lander. I was disappointed for the reason I never seen deer during deer season.

I also had an Elk tag.

As we were going up the road, my friend told me to look to the right and watch for deer if I didn’t I would miss seeing one.

Being disappointed I didn’t pay much attention to what he said. He was getting a little irritated at me.

Finally he said “Mike, if you don’t watch the hillside, your gonna miss a deer and more than likely it will be a buck!”

All I seen was horns and deer.

I stepped out of the Bronco and got on the other side of the ditch. He never even moved. I took aim and Boom!!!

All I seen in my scope was hair spread behind his shoulder.

He jumped and turned a 180 in the air and took off.

I thought for sure I was gonna lose him.

He ran 10 yards and started looking for a place to lay down.

I shot again this time hitting him in the liver and coming out the brisket.

He took off again.

He slowed down and as he went to lay down, I shot again this time missing him.

As he laid there with his head back I could see he was a nice 4×3.

Butch told me go ahead and put one in his neck to finish him off.

I was so excited!

Butch pulled his head and said,”Mike, you have got to look at this!!!”

He had a Nine inch drop tine just in front of his left ear!!

I jumped up and down with excitement.

Normally, it should have been my father that helped me get my first buck, but I am glad I shared it with a true friend who at anytime could have jumped out and shot it before I could but instead he sat there and waited for me to shoot.

My friend passed away two yrs later at the age of 20.

But I can still remember to this day that whether I got one or not, I spent time worthwhile hunting with My True Friend. A

nd that is a memory in itself.

The Buck was an added bonus for it weren’t for Butch and his persistence I would have missed a Buck of a Lifetime.