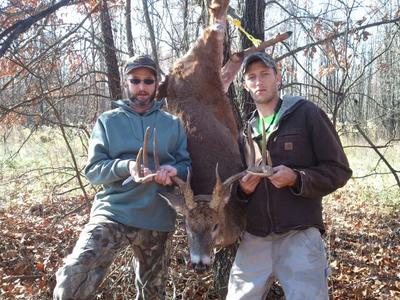 Hi my name is patrick marion I just got back from ohio where i stuck a huge 10 point. It was the afternoon of nov.5 I was hunting public land in vintion ohio. I was siting on the edge of a cutover and open woods with a hard funnel for deer. I had set this same spot the previous year and seen a real brute but never got a shot on him. So you could say it was a long year waiting to get back up there to sit in the tree again. I got in the stand around 3 pm got situated and started my wait. It wasnt long be for the deer started to move. After about half a hour I had a nice 6 come out of the bottom and come 10 yds by my tree i watched him ease on up the hill knowing there were biger deer in the area. Not long after seen two does cross the hill side at 102 yds. Around 5:15 the squirles on the orther hill side went nuts so i picked up my grunt call hit it twice and 3 mins later he appered walking up the hill feeding on acorns on the way up. He stoped at 45 yds and fed for a bit and he was tearing me up on the inside i just knew he could hear my heart beating. After about what seened like 30 mins but was really 5 mins he started walking towards me again. He walked over to the edge of the cutover and started to walk towards me and get closer. I had a Hole picked out at 25yds and said if he walked thru it that was my shot. An sure enough he he did. Right be for he got to the hole I started to draw my bow back and was so tore up i couldnt I had to reach up in the stars and get some where I didnt have none and finally got it back I came down on him and was shaking like a earthquake had struck. I told my self 25 yds second pin and hit the release. he bloted into the cut over about 35yds and stoped the started to walk again i thought did i miss but i seen his tail was down then he stagered backwards then stagered fowards a bit the fell over. I came unglued tied my bow up jacked down the tree and ran about 600 yds to the truck to send out a text to the guys that were hunten up there with me to let them know what just happened. There is more that i could write on this story hope you like it so far attached some pic for you one is me and my dad with the deer. Boy was he excited as I was. We scored him at the house when we got him home and got ruff.171 need less to say i will be stoked for years to come on this buck. let me know what you think.

Great Big Bucks on the Rosebud