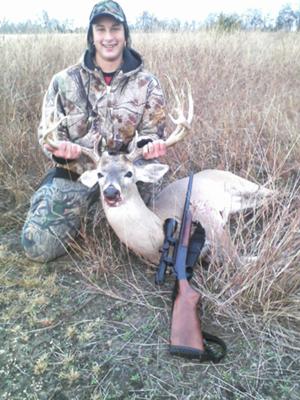 I started chasing whitetails in 1972, I suffered from “buck fever” early on, my dad tried to work with me to calm down and concentrate on a target, instead of just seeing the rack.

He had taken several bucks and was proficient at getting his deer year after year, including a huge 12 point that dress out at nearly 200 pounds.

Years passed, and some seasons where really frustrating. One season in particular where I was able to shoot at five different bucks, but still came home empty handed.

While I tried to tame this affliction, it continued. Each year getting more and more of a battle.

Each year ended with at least one opportunity to connect, and each year nothing to show for my efforts.

Meanwhile dad, and two of my brothers where able to take deer on a regular basis, and actually passing on smaller bucks.

Now the deer being brought home were older bucks, with much larger racks. Still I was scoreless.

Yet with all this I met each new year with renewed hope. This may explain why I’m a Cubs fan. 1985 started out like all the others. I missed four different bucks.

Scott, my hunting partner tried to console me, and he mentioned that I would get my deer, but it would have to be a reaction thing, giving me little time to think about all the possibilities.

It was the last day of the season, we got several of us together for deer drives. On the last drive of the day, it finally happened. And like my buddy said, it was a reaction shot at 15 yards. A 7 point, the ice was broken.

The next few years were productive. I collected my buck almost every year. And twice I have taken two, 1 with a bow and 1 with a gun. I too started to pass on the smaller bucks and started to get better and better bucks. I now rarely missed. I thought that I had become the complete hunter. I have since learned, I was just getting started.

Due to a job offer in Texas I left my home state of Indiana. Got married, and had a son of my own, what a treasure he has been to my life.

From a very early age, he showed interest in hunting. I have spent countless hours sharing a deer stand with him.

Meanwhile I tried to impart my insights. My hope was get him interested in the sport, and hopefully not go through my frustrating bout with the dreaded “buck fever”.

Now he has his story to tell around the campfire, and between football at school and deer hunting, my son has been hooked. I am proud of what he has become, his future is bright.

As a youngster he once ask me, Dad, when I’m old enough to move out on my own, do I have to find my own hunting partner?

I was surprised, and simply told him, that deer hunting was forever, no time limits.

This coming fall plans are for the first time, that I will go back to Indiana with my son and hunt with my dad.

I keep thinking that it just doesn’t get any better than that.