by Jay
(Fort Worth, Texas) 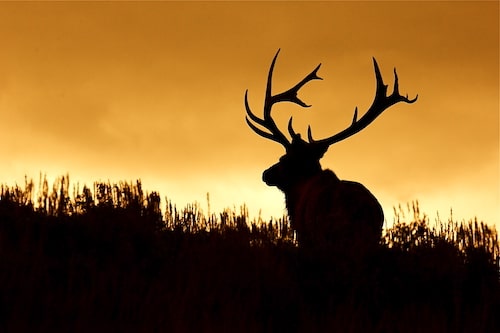 I have been waiting for my elk hunt at Banded Peak Ranch Outfitters since last September when I had to leave Colorado earlier than expected to make it home for my anniversary. I obviously got married before I became addicted to elk hunting, since my anniversary is September 20.

My trip was scheduled for September 22-29 this year, but I got a last-minute invite from a good friend who helps run the Banded Peaks Ranch. I had not hunted the very early part of bow season in Colorado before and wasn’t sure what to expect, but knew I really wanted to check out this unbelievable 17,000 acre ranch.

I didn’t get up to the camp until close to 1:00 AM, after taking the last flight in to Santa Fe. The airline managed to lose my bow so I just scouted with my guide the first morning of the hunt.

We saw a very nice bull that first morning and of course, I didn’t have my bow. I decided to drive back to Santa Fe to pick up my bow and gambled that the airline would actually get it to Santa Fe.

This was better than waiting my entire hunt for my bow to show up. I got lucky. My bow was there and I drove as fast as I could legally, maybe a touch faster than that and got back to camp by 1:00 PM.

Right when I got back to camp, I took about 30 minutes to make sure my bow was sighted in out to 60 yards or so, and then we were off to sit a water hole.

We were sneaking down through some scrub oak to get down to the water hole and spotted a few cows and another very nice bull. We got as close as 60 yards, but the trees were too thick to get a shot off.

We tried to stay on that bull as long as we could, but he gave us the slip and as quick as we found him, he was gone. We made it down to the water hole and sat there for a bit.

After I dozed off for a few minutes (since I had only gotten maybe 3 hours of sleep and had driven almost 500 miles the last 12 hours), we got a little activity and a turkey came in to the water.

She fed around and got a drink and then wandered off. After the turkey left, it rained for a little bit and we decided to go slip through the wood. The ground would be quieter and we were both terribly bored sitting on the water hole with limited activity.

We had hiked almost all the way back to the truck when we spotted two cows with their calves. We stood as still as we could, but eventually they became unsettled and trotted off into the woods.

We took the truck over to another area to hunt. We hiked up another road and fairly quickly found another nice bull.

Not even a full day into the hunt, I have now seen 3 really nice bulls. This bull was absolutely destroying a shrub and seemed to get more aggravated each time we bugled and cow called at him, but he didn’t bother to ever come check us out – still a little early in the rut.

We saw him walk off slowly up the mountain and we never spooked him off. We found one more bull on the hike back down to the truck and actually crept up to about 30 yards from him. If he had been just a little bigger I would have let an arrow fly. It got dark pretty quickly after that.

What a first afternoon of hunting!!

The next morning we got up early, had a little coffee and then hopped in the truck to go hunt up another one of the roads that run all over the ranch.

It was a long hike up to the top and we didn’t have much activity the entire way up. We were just getting towards the top, when we finally heard a bugle.

We hurried up towards where we heard the bugle and then my guide stopped me in my tracks. We had two cows at about 40 yards just feeding from our right to left.

After about 30 seconds, I could see the bull’s antlers, and he was working his way right to where I would have a 40-yard shot.

The only problem was the wind was swirling just a bit, since we were close to the top of the ridge. Pretty quickly after I noticed the winds swirling, another cow winded us over to our right (we hadn’t noticed her yet) and she buggered up the 2 cows and the bull and they all ran up the mountain.

He was only about 5 yards from making it to my shooting lane. Frustrating, but still very exciting!

We hiked back down and I thought we were going to head for breakfast, but my guide wanted to hike up another road and check a couple wallows.

They had been getting some good rain, so he thought there would be some good water in those wallows.

We parked the truck and headed up the road. We had barely made it a few hundred yards when we heard a bugle very close off to our right.

We checked the wind and it was perfect to get set up on this bull. We bugled and cow called. The bull waited a while then finally answered.

When he answered, we heard another 2 or 3 bulls answer also. My guide smacked a tree with a branch and bugled. The bull answered again. He was curious, but not really aggravated like they will be in a few more days when the rut intensifies.

We were in some pretty good cover and I had 2 shooting lanes. The bull would answer, and we could hear him moving across the mountain, but I couldn’t see him. My guide had bugled, cow called and “rattled” and the bull was curious but not coming too much closer.

My guide decided to try to make the clunking sound that bulls make when they are drumming. That was the trick and the bull appeared all of a sudden where I didn’t expect him. I was on my knees on a game trail in a ready-to-shoot position. When the bull got behind a tree, I drew my bow. The bull spotted me right as I finished my draw, but I remained completely motionless and he didn’t spook.

The bull eased into the only spot where I had any prayer of getting a shot off before he moved on up the mountain. One of the spruce trees was blocking me shooting him right in that perfect spot on his shoulder, but knowing the size of the kill zone on a bull elk, I was comfortable aiming just a few inches high.

Knowing that most people don’t ever get drawn on a bull broadside like this, I said a quick prayer and decided to let the arrow fly and take advantage of the opportunity.

I followed through and watched as the arrow disappeared right into both lungs of the bull.

He had started to turn just a little so the arrow hit his opposite shoulder and didn’t pass through, but it was a perfect shot given the circumstances.

He ran off a little ways and my guide quickly bugled to stop him.

We heard him coughing pretty badly and heard him lay down and knew that my Mathews bow had been successful again.

We slipped out of there quietly and waited 45 minutes to go recover him.

It was hard work skinning, boning and packing the quarters and the head out of the woods, but it was well worth it.

An awesome hunt for the first week of bow season in Colorado!!

Thanks to everyone at Banded Peak Ranch Outfitters – especially Kyle Bramwell, guide extraordinaire!