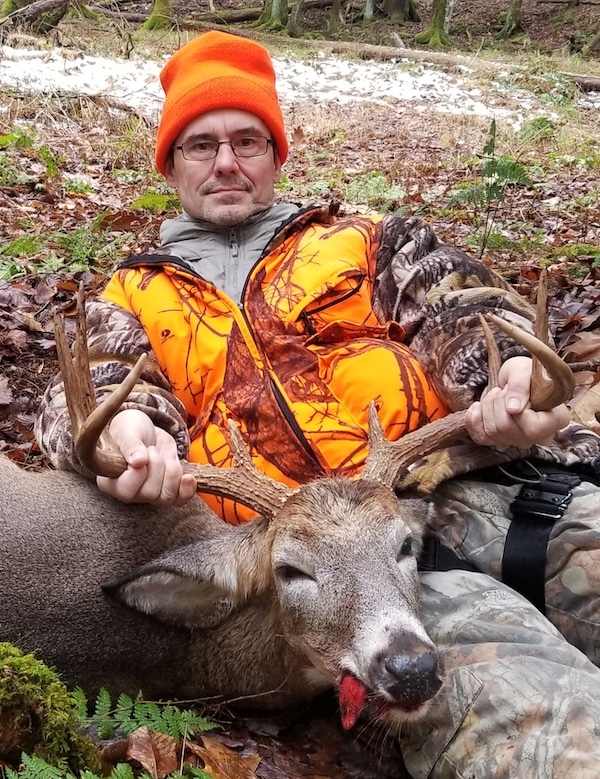 It was the last day of rifle season 2:30 in the afternoon. I was going to give up and go home.

I had a disappointing season from hot, cold, rain, snow, sleet to a truck driving down the gas line where I sat one day.

I figured I’d stay and I heard a noise!

I thought maybe a squirrel but it seemed heavier!

I waited to hear it again and then it’s a buck!

It ran right in front of me 20yds away and stopped.

Now I had to pick up my rifle without him seeing me.

I got the gun up without him noticing, he’s looking around a little spooked and then he looks up at me in the tree and turned and walked away from me.

He stopped again turned broadside and to a final look at me and began to run!

I was on him the whole time and boom!

I shot at that moment he ran crashing through the laurels I can hear him running and running, oh no!

I waited for a little bit got out of my stand and went to where I shot.

There was blood and poop!

So I waited even longer and didn’t want him to keep going.

He was bleeding good with some poop still coming out!

Then the poop stopped and then there was bubbles in the blood, lung!

I waited a little longer again.

As I began tracking him once again I had my head down and oops I saw another hunter!

He was a younger guy and he asked if I needed help.

I said if you want to.

I was hunting game lands and the guy says don’t worry it’s his dads land!

We walked a little bit more and across the creek was my buck!

He asked me if I wanted to get his quad and take the deer to his house since my drag would have been like a mile.

I said yes and he went and got it while I gutted my deer.

When he came back I told him I left my license in my jeep and that it was up to him if he still wanted to take it without a license.

He said yes and gave me his address and I walked to my jeep and drove to his house.

I didn’t know him from nothing.

Thank god he didn’t lie to me!

I got to his house and his dad was there and his fiancee.

I filled out the tag and put it on the buck.

I thanked him and his dad.

He had my buck on his trail camera and I thought that was cool, then he asked me if i got a 11 pointer back in 2012.

I said yes and again he showed me pics of my buck on his trail camera again!

The guy Justin took the time to help me on the last day of the season with a couple of hours to spare.

When he could have walked away and hunted.

You couldn’t write a better story!