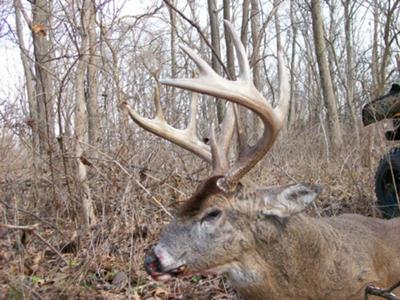 There is no such thing as a secret or is there?

In Illinois, one of the few states to hold record whitetail bucks, there is the Bow season which runs October 1st and into the deep cold of late January and the gun season that is split into two separate seasons.

Often, during bow season is when I see more B&C bucks either in pattern or in the pe-rut.

However, getting the perfect shot can be extremely challenging and requires a great deal of time invested making for a successful hunt. Thus, I often count on the gun season to increase my odds of taking the trophy buck I desire.

The first gun season typically occurs the Friday, Saturday and Sunday (3 days) the week just prior to Thanksgiving.

This first three day season, more often than not, is warmer and can often be unseasonably warm making for deer movement a minimal.

The exception can be if the pre-rut coincides with this first season making for increased deer movement.

This year, if I understand correctly, the pre-rut in our area is to occur at the end of October and the first week of November.

The excitement behind this season brings out more hunters pre-scouting the woods and filling the stands and blinds on opening day.

Whitetails often disappear due to all the hunting pressures.

Two weeks after the first gun season, the second gun season typically occurs the first Thursday through Sunday(4days) of December.

As an observer over the last 15 years of hunting, the weather is often wet and cold making for increased deer movement and often the second pre-rut/rut is taking place at this time.

This season is often a sleeper compared to the first and I have seen consistently more B&C bucks during the second gun season than the first.

Perhaps a combination of colder weather, less pressure from hunters and a greater chance that the second pre-rut/rut is taking place increases your odds of seeing and taking a trophy animal.

I must share that I am blessed to have the opportunity to hunt my own farm.

Further, the farm I hunt is 388 acres of which 300 plus are mature hardwoods and holds some of the biggest whitetails in the country.

I have passed on over Twenty- 150pt. bucks in the past 10 years knowing the potential the farm offers for giant bucks.

I have seen typical 10 pointers over 200 B&C on two occasions and many in the 180-190 class out of bow range or just not in my shooting lane.

Why not grunt them in…tried that and chased them away.

I never mastered the grunt call as many of you surely have. As for most of you reading this, these bucks are seen once and seldom seen again.

Last December, the Thursday opener, there was a southwest wind and I set up a ground blind built of natural materials over a well traveled inner farm funnel. This funnel exists in the central part of the farm where a lot of chasing and breeding takes place.

It was a dry morning as I heard the crunching of leaves approaching. About 30 yards out a small buck, looking very worried and scared, hurried past my blind.

Moments later two does came crashing though the woods and passed.

I knew something was up but no mister big!

Plenty of light and just a beautiful morning.

Down the doe trail about 100 yards out I could see a flashing white.

Following the path the does and smaller buck traveled just minutes earlier came this magnificent animal.

As he approached I hesitated to shoot.

Upon observation, he would easily score a 160 plus and was a most perfect 10 pointer.

Again, being spoiled over the years in observation of truly giant bucks, this buck was certainly a shooter but I knew there were greater trophies.

He stopped at 20 yards and looked right at me as if he knew I was there.

Yes, I did shoot and I hope you enjoy the photos of this beautiful 170 plus pt. B&C buck.

I hope you enjoy your hunts this fall and please feel free to drop me a note though John’s Forum. 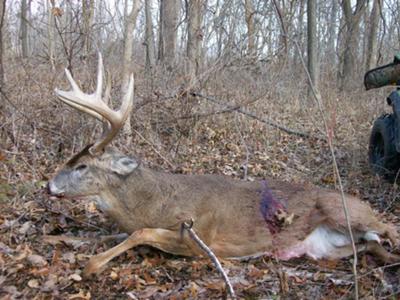