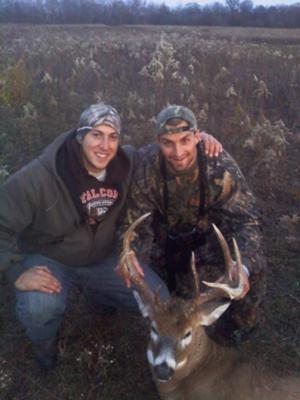 The day was November 13. I had hunted hard all season but to no avail.

After classes in Findlay, Oh, I got in my truck and headed south to the central Ohio area.

After arriving at home, I threw on my camo and headed to my stand.

The wind was southwest, so I had many options as far as stand locations. I chose an oak tree that was overlooking a very big CRP field.

The temperature was about 70 degrees, so I was not planning on having much luck. However, I knew the rut was in full swing and anything could happen.

Early in the hunt, I had a small buck come in from behind me, but I passed on him. As the the night rolled on, I rattled about every forty or so minutes.

About thirty minutes before dark, I looked up to see a shooter buck come out of the thicket about 200 yards away.

As he entered the field, I gave him a grunt with my bone collector grunt call.

The buck immediately started running across the field, and I barely had time to get my bow off the hook. As he closed the distance, I could feel my heart pumping and my legs shaking.

It was such a quiet night that I thought the buck was going to hear my feet vibrating against the stand, or, the draw of my bow.

I was hunting the corner of a fence row and the buck was coming right to it.

When the buck got in between me and one of the big tree branches, I drew my Hoyt Katera XL.

The buck was now at five steps.

I grunted and stopped him before he was about to jump the fence.

My pin was focused on his lung area and I let the arrow fly.

I knew I hit the buck good and I watched as he ran out in the tall crp field. My buddy Andrew from California was hunting across the crp field from me.

He did not see me shoot the buck, but he saw him run out in the field after the shot.

He informed me that the buck fell three times and the third time he did not get back up.

I have to say that there is no better feeling than this in the world!

Good luck to all deer hunting in Ohio. We all need to stick together! 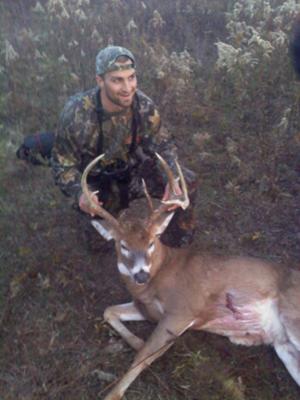