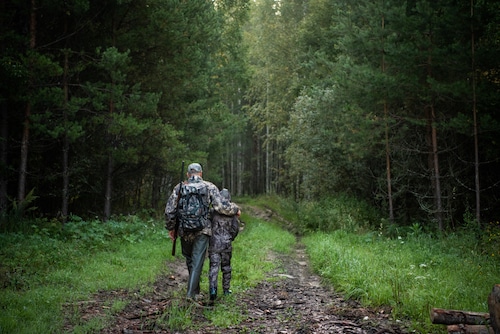 My 1st deer season in which I could legally carry a gun was in November 1978. The whole week prior to opening day I was a day dreaming fool. I would often have visions of the monster 12 point creeping through the Balsam, while trying to digest some crazy geometric theory my teacher was trying to drill into my head. Finally the bell rang at 3 pm Friday. Me and my oldman were going to meet some freinds at a cabin in Rusk county Wisconsin, about 10 miles North of Ladysmith.

The snow was just starting to fall as we began the 100 mile trek to the wild north country. By the time we arrived the snow was deep enough to warrant 4 wheel drive on the last 5 miles of unpaved county road leading to the cabin. I was really starting to worry that my 1st deer hunt was going to get snowed out. The old salts in camp told me to relax the snow will make the deer stick out in the forest. So I stowed my gear and got my clothes ready for the morings hunt. After that was completed the 8 member hunting party had a venison steak fry and a few adult beverages, of course it was Pepsi for me, as I was only 14.

The festivities subsided about 10 PM and every one hit the sack for opening day 1978. I tossed and turned the whole night as my nerves were on pins and needles in anticipation of my 1st Wisconsin deer hunt. Finally the alarm went off at 4AM and I remember one of the old salts went outside to utilize the 2 holer and returned a few minutes later with snow over the top of his Sorel boots. About a foot of the white stuff had fallen during the night. Breakfast consisted of scrambled eggs, hashbrowns, and burnt toast with 1/2 frozen orange juice to wash it down.

Now granted this is 1978 and 4 wheelers weren’t even thought of. So the mode of transportation to the paper mill land about 3 miles from the cabin was a 1972 Chevy K-5 all time 4×4 that rode like a log wagon but did manage to get us to the woods with only one traction break. Me and my father walked 80 acres off the main road in knee deep snow while it still was pretty dark outside. I was amazed at how my father navigated the pitch black forest. We arrived at my stand about 615 my father supervised me loading my model 94 32 special and advised to aim true but aim safe. I sat on my stump with pine boughs to break my shadow, while my father walked another 300 yards deeper into the timber stand.

I sat there as light began to infiltrate the forest. There were some stumps and blowdowns that kind of looked like deer in the distance. But after watching them intently for 20 minutes with no movement I decided they probably weren’t. I heard the 1st rifle shot at around 645, still pretty dark in the woods but probably light enough to shoot if some one was watching a field. About 715 it was light enough to shoot in the timber stand where I was posted. From 715 till about 815 It was pretty steady shooting in the woods all around me ( nothing close though) as a rifle shot can carry up to a mile. I remember it was about 830 and the morning barrage had subsided and I was getting really cold. I didn’t want to get up to walk around as it was still prime hunting time. However my frozen feet convinced me otherwise. So I just walked around my stand for about 5 minutes to get circulation back in my feet. Just as I was getting comfortable in my stand the morning silence was disrupted by the very loud report of a rifle that startled me, about 10 seconds later another KAPOW.

My father always told me to be ready for action when somebody close by shoots. So I grabbed my rifle away from its rest on a nearby poplar tree holding it on my lap. I itently scanned the terrain all around me for what seemed like an hour, but it was probably 3-5 minutes with not even the slightest movement any where. About 20 minutes later I see a little speck of bright orange in the timber heading for me. I thought it was my father coming to get me to admire and field dress the buck he just shot. However my excitement was quickly dashed as the hunter was an older man I never saw before carrying a Remington semi-auto rifle, and my father has a bolt action. He came up to me and said it was him that was shooting at pretty decent 10 point about 20 minutes ago. He was pretty sure he missed but was making wide circles as he lost the track in the swamp. I wished the gentleman good luck and he proceeded to head back into the swamp he just emerged from.

About 915 I’m starting to get really cold again. I’ve been on the stand for 3 hours haven’t seen anything but hunters and squirrels. I’ve still got 3 hours till my dad picks me up for lunch. I’m starting to get really antsy. I force myself to sit still. Soon everything I look at for longer than 10 seconds looks like a deer bedded. When all the sudden I see a brown flicker in the swamp about 200 yards to my west. I struggle to see it again about a minute later I see it plain as day A monster whitetail buck is trotting right towards me. My heart is beating about 200 bpm, I swear the deer can probably hear it. I raise my rifle and pull the hammer to full cock. Any feelings of being cold are gone. I’m trying to maintain composure as the buck slows to a walk at about 50 yards. I’m double checking that both sights are lined up on the bucks shoulder. I apply a gentle squeeze to the trigger and BANG the buck drops like a ton of bricks. This whole sequence of events probably took 90 seconds from start to finish, but it seemed like an hour to me. I quickly levered another Winchester 150 grain silver tip into my rifle incase a finishing shot was needed. I slowly approached my fallen monarch, rifle at the ready. The 1st shot did the trick. Instead of hitting the front shoulder I must of jerked the trigger and hit the neck and spine juncture. Poor markmanship aside, it was a clean one shot kill.

I didn’t even bother to count the points I was so excited. About 5 minutes later my father showed up and said ” HOLY CRAP” I downed a 10 point that some men will never shoot in their life time. After the field dressing 2 other hunters from our party showed up and we commenced dragging the buck through about 10 acres of the thickest brush to the nearest skidder trail. We were ringing wet by the time we got to the trail and still had about 1/4 mile to county road. Although the skidder trail was lot easier dragging.

We got back to camp about noon and there was 3 other bucks on the pole already a small 8 and 2 spikes ( 1978 pre QDM) My deer was a giant in length and girth compared to the other 3. 10 point, 22 inch spread and weighed 225 lbs after hanging for 8 days. I’ve never had the rack scored, but seasoned hunters have told it’s probably a 150 class buck.

I’ve been deer hunting for 33 years now and primarily use a .280 as my deer rifle with no complaints as it consistently does the job. However there is a nostalgic side of me that want’s to grab that stubby old model 94 32 special in the back of my gun safe. I’m sure it will drop deer like lightning today like it did in November 1978