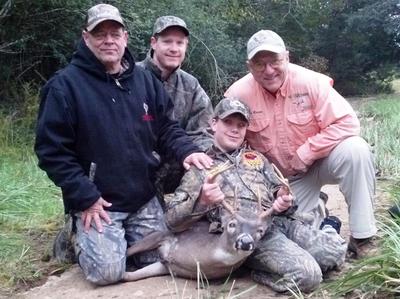 THE MOST SPECIAL DEER HUNT EVER #2
It’s hard to believe a year has gone by since the last youth weekend in Tennessee and our participation in The Kids Hunting For A Cure event.

This hunt was just as special as the first we participated in.

We had been in touch with Dale Riddle, president of the Matt Malone KHFAC Chapter, and knew ahead of time we would be hunting with 13 year old Grayson Phillips from Alabama. Grayson has spina bifida, a developmental disease where vertebrae overlying the spinal cord are not fully formed and remain unfused and open, and as a result Grayson is in a wheelchair.

Believe me it doesn’t slow him down a bit. When it came time to get in the truck to go hunting, he beat me in. Everybody at the hunt fell in love with Grayson immediately. He is an example of what all young men should be.

We arrived in town and called the landowner on whose property we would be hunting, Mr. Hue Counts. Being unfamiliar with the town, Hue met us to take us to the fairgrounds. To my surprise he pulled up with Grayson and his dad, Scott. It was awesome, after introductions it was like we had known each other for years.

We got to the fairgrounds and checked in with everyone. We met with Larry Lavine from Alabama, host of the upcoming TV Show, Cookin’ It Wyld Style. He had brought Scott, Grayson and myself some great, personalized Longleaf Camo for us to wear during the hunt. In addition, the Mississippi-based Long Leaf Camo and Larry, whose family owns Dale Seasoning generously donated several items for the silent auction.

We also met up with Wilson Burton who would be filming Grayson for Spiritual Outdoor Adventures with Jimmy Sites.

That evening we spent some time checking out the land and set-up on Mr. Counts’ property so we could start hunting early in the morning. As with all best laid plans sometimes the unexpected happens. Saturday morning hurricane Sandy moved over the east coast, and Tennessee experienced the wind and rain that moved in ahead of the storm. The weather was really bad and the wind was blowing in all directions.

We saw three deer that morning. Through all of the wind, our little group – Grayson, Scott, Wilson and I – never got busted. Grayson was very patient and didn’t want to shoot at any of the three deer we saw that morning.

We sat there for awhile and eventually a coyote came across the top of the hill. Grayson had never shot a coyote so he pulled down on this one. We spent some time looking but never found a blood trail or the coyote.

We called it a morning and went back to the fairgrounds to see how others had done. The weather had affected the opportunity for many of the young hunters, but a friend of ours 14 yr-old Jordan Colgrove had killed a nice 8 Point that morning. Jordan’s dad, John from Antler Addiction had come to film three of his kids who were hunting that weekend. (By the way, all of them ended up getting their deer.)

Our group spent the afternoon at the fairgrounds while Wilson filmed background and a debriefing of the hunt. While we were there Grayson spent time visiting with other hunters and the vendors who had come. Needless to say, he stole the hearts of everyone there. Wade Morrison, owner of Whitetail Rage Scents, was so impressed with Grayson’s enthusiasm and spirit, he proudly gave him a company t-shirt to wear.

Soon it was time to leave to get back in the blind for the afternoon hunt. At first there were a few does mingling around, but no bucks. Soon however the deer started coming out all around us. What we thought was a nice 8 point came out and gave Grayson a broadside shot at about 90 yards. The single shot 243 barked again.

Grayson made the shot, hit the buck, but he ran all the way out of the field. One of the does hung around just a little bit too long and Grayson let the 243 sound one more time. The doe fell in her tracks.

This was one happy little boy and dad in the blind.

After recovering the doe, we went to look for the buck. Walking to the wood line, I heard the buck getup and run off. There was some good blood evidence so we started trailing because Grayson & his dad were leaving early the next morning. We followed the blood into the woods and back to the field where he was shot. The blood ended at the edge of the field.

I guess we must have been too tired because we walked all over the field and never saw the buck even though we must have passed by him at least 5 times.

The next morning at daylight we had been there 15 minutes and were looking in the field when John Colgrove – who had come to help – found the buck.

I don’t know who was happier me or Grayson. My first thought, which I expressed out loud, was “thank you, Jesus for help us find this buck for Grayson.”

These are the greatest hunts in the world. I don’t know who has the most fun, the kids or the adults.

Proceeds from the KHFAC hunts in TN go to the Memphis based St. Jude’s Children’s Hospital to find cures for childhood diseases.

There is only one bad thing that goes with these hunts. You get to know these kids and fall in love with them. Then later on in the year you get a phone call to say that one of them didn’t make it.

There are some things in life I believe we will never understand and this is one of those things for me. I wish I could take every one of them hunting and fishing.

This article was written by Rex Holmes Jr., CEO, Vapor Trail Scents llc, solely to promote the goodwill of St. Jude’s Children’s Hospital and the Kids Hunting For A Cure Events.

Anyone who wishes to publish or excerpt this article may do so.