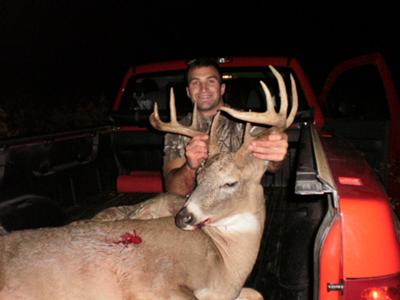 My work for this big Ohio buck started in May of 2010. My brother Luke and I put in a great deal of work in the off season setting scouting cameras, putting down mineral licks, and tilling food plots.

We had two pretty good bucks on camera all summer.

Without many daylight pictures of either of them, we were not all that confident that we would have an opportunity to kill either of them. Both the bucks seemed to show up at our camera right before first light and right after dark.

We set a stand in July by the trail cam that was producing consistent pictures of both bucks. However, the stand was only good for a southwest wind.

The first twenty five days of the season produced nothing but north and northwest winds, which was unusual for early season hunting in Ohio.

On the 26th day of the season, we finally got a southwest wind. I washed all my hunting clothes, took a shower in scent free soap, and put on scent free deodorant, in preparation for the evening hunt.

I do believe scent free products help, but they will never give me or anyone else an opportunity at a mature buck if the wind is wrong for the stand location.

I arrived in my stand about two hours before dark and did not have high hopes because of the strong twenty five mile per hour winds.

I just got done thinking to myself “How stupid are you Jesse? You have bowhunted hard for twelve years and are stupid enough to hunt the edge of a CRP field with twenty five mile per hour winds!”

About a half hour after having these thoughts, I looked up to see the big ten pointer that we had been watching for the last five or so months.

I took out my can call and gave him a few doe bleats.

At this point, the buck was about 100 yards away.

He turned, but quickly flicked his tail and kept walking. The buck was walking north and would catch my wind in about fifty yards.

In desperation, I took out my bone collector grunt call and gave him a grunt. The buck stopped immediately and I could tell by his posture that he was not happy.

I sensed his frustration, so I gave him one more grunt.

The buck turned and started walking my way after the second grunt.

I was so excited all I could do is try my best to calm down and think about my follow through before the shot, if presented with one.

The big ten was now at about forty yards and I knew I was about to get my chance.

As the buck closed the distance, I raised my bow, but did not draw.

As soon as the buck got behind a thorn bush, I drew my bow.

After a few more steps, I did a mouth grunt and stopped the buck at fifteen yards, while focusing my pin on his right shoulder.

I released the arrow and hit right where I was aiming. The buck turned and started sprinting with his nose to the ground and heavy feet.

Thanks to the two-blade rage broad head, the blood trail was great.

The buck went approximately 150 yards and died in the CRP field.

My brother ended up harvesting the other buck we had on camera on November 5, 2010. 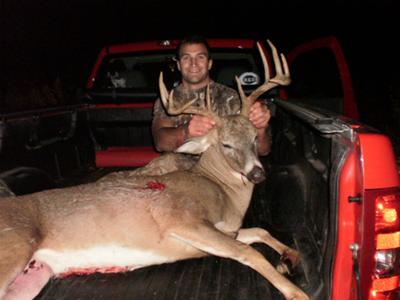 I could not ask for a better season!

I look forward for many more to come!

Good luck to everyone hunting!

Hope you enjoyed my story!