Great Big Bucks on the Rosebud
By Scott Winston 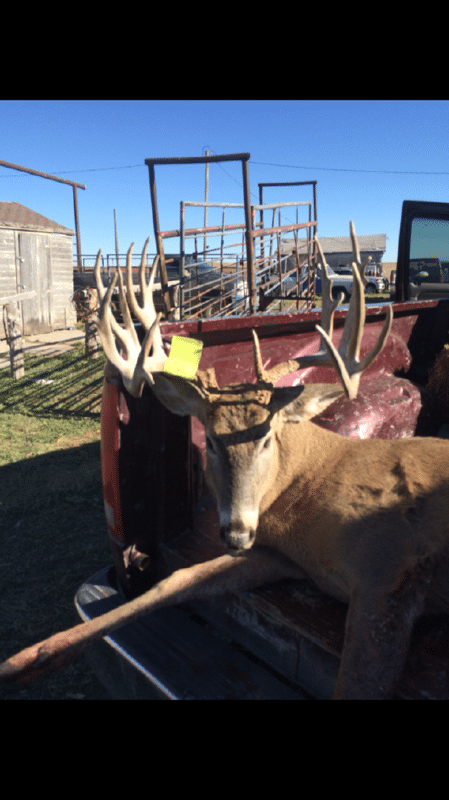 Use caution if you decide to hunt the great big bucks on the Rosebud Indian Reservation in South Dakota.

Caution, not in the sense that you will find yourself in danger, but caution, in that the mystique of this country will take root in your soul and it will be very difficult to break away – some have already tried, including myself.

It is a place of majestic buttes, vast native grasslands, oak islands and rich agricultural valleys, where a Native American spirit blows in the wind across a historic landscape.

It has become my home away from home for more than a decade now only because I cannot resist her call come hunting season.

On the Rosebud reservation, you’ll find a rich diversity of tribal grasslands that have been preserved over time, due in large part to the Lakota way of life and their respect for the land.

This virtue has been passed down through many generations in this ancient culture and consequently, much of the landscape still looks like it did when buffalo roamed freely there.

The Rosebud Reservation encompasses 1.8 million acres of native grasslands, a good portion of which is unturned prairie.

The countryside is a patchwork of agriculture and lots of pristine grass and prairie. 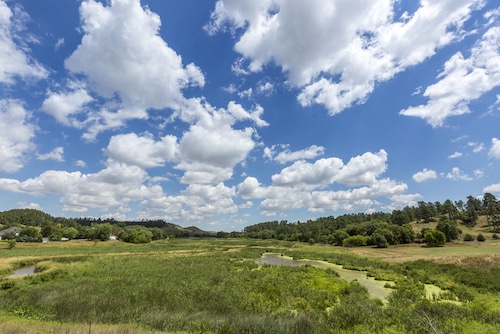 When accompanied by a Native American guide, a requirement by the the Rosebud Sioux Tribe or Lakota, hunters have access to all tribal lands.

My licensed guide, Chance Colombe, with “B&W Outfitters” has been guiding hunters for years on locating big bucks on the Rosebud Reservation.

He grew up big buck hunting with his dad here and knows Rosebud Reservation boundaries and the area around Mission like the back of his hand.

Chance’s family homesteaded here in this wild country many generations ago and are die hard ranchers.

It would be an understatement to refer to Chance as a cowboy.

I don’t recall ever seeing him out of his cowboy boots.

He loves to trade horses and at any given time has five or six dozen in the back pasture.

Chance has many thousands of acres of tribal ground that he ranches year round, well except during the hunting season.

His hired men run the ranch so he can guide hunters and even bag a big boy for himself.

He is an unselfish character who would rather see you pleased than himself.

I have met very few men that have the energy he does.

Folks are naturally drawn to his sense of humor and his easy going manner.

The fact that Chance Colombe is a direct descendent of two Lakota chiefs, Red Cloud and Red War Bonnet of the Rosebud Sioux Tribe, make him a natural leader. 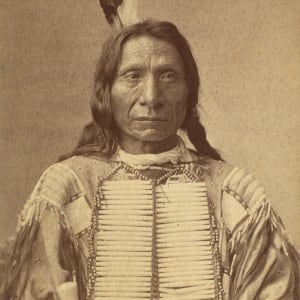 I have observed Chance guiding deer hunters for over ten years now.

I have had the good fortune of seeing many monster bucks on the Rosebud Reservation in the process.

The few hunters that have gone home with their tags unfilled, all had plenty of shot opportunities and missed; only to returned the following season with plenty of time logged at the range.

After seeing so many successful hunters season after season, I wondered how Chance’s own deer hunt went this past season.

I had already seen and taken photos of all of the bucks Chance’s hunters took.

I wanted to hear his hunt story.

We always read about the outfitted hunters and their success stories, but we rarely have the opportunity to hear about the guide’s hunt.

It doesn’t surprise me that Chance waited until the last day of the season to plan his own hunt.

With so much ranch work backed up and helping his mom and his sister, and a new girlfriend, he barely had time.

Even then, the mission was mostly to bag a few freezer deer for winter meat, to provide for his family when they desired something different than beef.

Of course, he also took a friend who he had promised to set up with a big buck opportunity.

As the story goes, Chance shot two nice does that day and the afternoon was creeping toward dusk.

So he chose a spot close, where he knew a big buck had survived the long season, in fact, this big buck was one of his back up big bucks that he had been saving.

He decided to take his friend Abel and give him the shot.

Once Chance had set Abel up in the perfect location, Chance began the process of moving the big buck to his friend.

Abel’s older brother and sister were there also.

They had already taken their bucks for the season and were along to help and for the moral support of their younger brother.

Chance located the big boy and got him up and moving toward Abel.

All was going according to plan until Chance began to wonder why Abel hadn’t fired yet.

An amazing sunset cast a surreal coloration onto the setting. 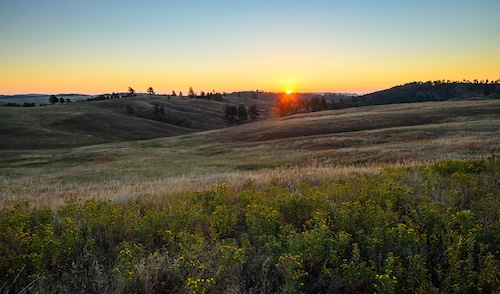 Chance took a long stare, breathed deeply and gave thanks for the moment.

When the colors finally began to gray, Chance called Abel on his cell to find out what was going on and tell him to shoot.

While Abel could clearly see the big buck, he did not like the shot he had.

So Chance snuck in for a closer look, cowboy boots and all.

He arrived at the place where he was close enough, a few more steps and the big buck might spook.

He could barely see the outline of the buck, his big rack sticking up and visible through the brush.

Chance looked at the time – there were only a few minutes left before the close of shooting time for the day and… the season.

He waited patiently for Abel… thinking.

He figured that he’d wait until the last minute in case Abel changed his mind.

Chance could see Abel now as well and that big buck had Abel locked in his sight.

Able was frozen, unable to move in fear the buck would bolt.

His 300 Winchester mag came up instinctively and he dropped that big buck in his tracks like they were both born for that moment.

It was one of those amazing hunts on the Rosebud Reservation.

While this hunt brought lots of laughter, when considering Abel’s position, especially from his Abel’s big brother and sister, Chance only snickered – once.

While his cowboy boots have been blessed to walk and ride on this tribal ground his entire life, Chance has never taken his heritage or his opportunity to hunt this sacred land for granted.

He stands as a model within the Rosebud Sioux Tribe.

Ancestral leadership blood coursing through his veins, Chance wakes every day, takes a deep breath while looking out over the vast expanse of his tribal ground and he gives thanks for his ability to hunt tribal lands.

He is a young man wise beyond his years and he realizes how special this place and his role in it really is.

I’ve already seen many great things happen in his life, not to mention the great big bucks.

I look forward to seeing even greater things happen for this great, great grandchild of the Lakota war chiefs.

A primal spirit is out there to be discovered.

If you are open to it, the spirit will sing to your heart and move you.

Chance has shown me this.

I have found many blessings in this wild country and I am now hopelessly drawn here.

Many Lakota sacred places are scattered across the country side.

The majestic landscapes are rich in Native American history.

Chance does an excellent job lending his unique perspective to the history of the land and his beloved Rosebud Sioux tribe.

Many stories are told during the hunt, many relate to the history of the land, the Lakota people and of course the many great big bucks on the Rosebud Reservation.

While the deer hunting is outstanding, the cultural experience that awaits will change you forever.

Since he grew up on the Rosebud Reservation, he has many connections and can accommodate hunters within a range of rates.

You will have the great big buck hunt of a lifetime – unless you come back and join the growing list of clients who are returning year after year to hunt on the Rosebud Reservation. 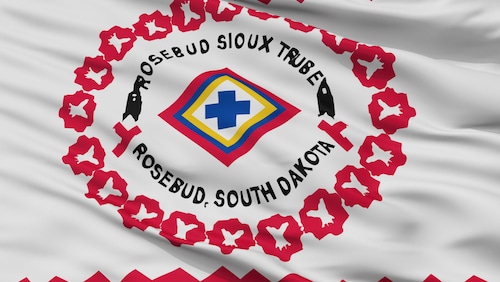 Where is the Rosebud Reservation located?

The Rosebud Reservation is located in southern South Dakota. It encompasses over a million acres of tribal lands.

What hunting options exist on the Rosebud Reservation?

All of the animals that are on tribal land are considered Rosebud Sioux Tribe game and exclusive hunting is reserved for the tribe. You can hunt tribal lands, but you must be accompanied by a tribal guide. 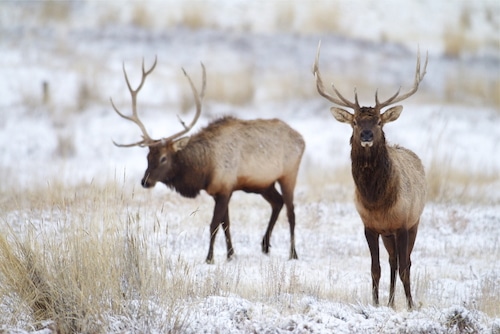 There are many successful guides that specialize in big game hunting seasons on tribal land.

Elk Hunting – The Rosebud reservation has an amazing elk herd and an elk season that lasts almost 3 months long. There is also a trophy elk season that occurs during the rut for some very exciting hunting experiences with a very high success rate. 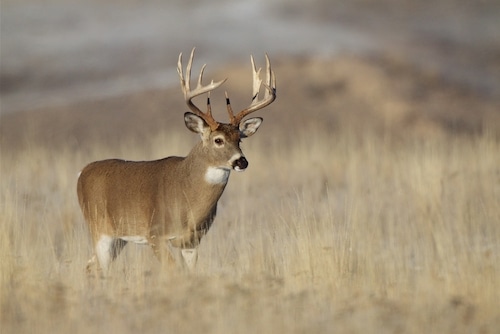 Antelope Hunting – There is some amazing antelope hunts available on the Rosebud Reservation. Antelope season occurs in August and September and can be an exciting challenge.

South Dakota is known for some awesome waterfowl hunting and the same is true on the Rosebud Reservation. Waterfowl seasons occur September through December.

Shooting prairie dogs is a long standing tradition in South Dakota. Prairie dogs are very prolific and can overpopulate an area quickly if they are not controlled. Prairie dog season occurs April through Mid August, however there is no hunting for prairie dog on June 25th because it is Native American Day.

Do I need a South Dakota hunting licence to hunt on the Rosebud Reservation?