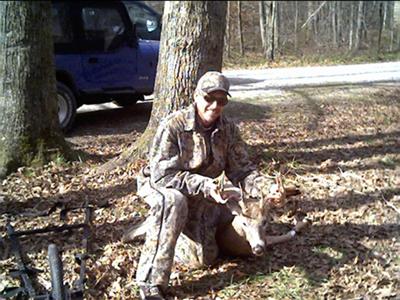 It was a cold morning in Bath county on the park where I was hunting with my step dad and his kin.

We all got up and they were busy fixing breakfast and I had a long walk ahead of me to where I wanted to hunt. So I grab some cookies and headed for the door of the camper.

They all asked me what I was doing and I said I am going to kill me a deer and headed out.

I fired up my truck and drove as far as I could on the fire roads at zippo in bath county. As I parked and loaded my gun, I could hear coyotes hollowing in the distance.

I grabbed my pack and started walking.

Where I wanted to go it was a 30 minute walk then I had to climb up a tall mountain to the top of a ridge by a trail I had found the year before.

I was truly excited with anticipation as daylight broke across the ridge.

With in the first hour I had heard 10 or 12 shots off in the distance. I was ready for my turn but still nothing.

I was sitting by a fallen tree and I had a tree stand umbrella in front of me and 1 behind me to make a blind.

I was still waiting but was getting hungry so I broke out the cookies and a bottle of water that I had packed the day before.

I finished them and decided to light up a cigarette. As I was smoking, I remembered I had not put out any scent. So I stood up and leaned out in front of where I was sitting and put some scent on a little sapling that still had a few leaves on it. Then I sat back down in my little blind.

30 minutes or so went by and more gun shots out in the distance. By this time I thought, well I probably won’t see a thing.

So I lite up again trying to figure if I should stay here or go walking around to look for another spot.

That’s when I heard something behind me.

At first I thought it was a squirrel playing around so I looked over my shoulder and to my surprise I saw the nose of a deer.

With my heart about to explode I got on my knees with my 30’06 in my hands and waited then it took another step and I saw what I had been waiting for a real dark rack.

I could count 4 points just on this side.

So I waited, I could not believe it he was only 2 foot away from me then he took another step and there was his chest.

I was being as still as I could I couldn’t move cause he was looking right at me. So I had to take the shot from the hip.

So I shot, he jumped up on his hind legs and I stood up as he fell over on his back. He landed on top of my backpack and my cigarettes at my feet.

It was a good shot and I could not believe how close he was to me when I shot. I waited a few minutes, then I gathered up my stuff and field dressed him.

And of course I had to count his points it was a 9 pointer he was my first real buck.

So I decided to hide him and go and get the hand cart at camp and some help.

So I hiked back to the truck and went to camp where I found my step dad and his son and a couple of others and told them I need some help.

So we took off to go get my buck, it took us about a hour and half after we once got to him to drag him to the truck.

Mine was the only buck killed by us that weekend in the camp ground were we were staying.

I still have his rack hanging in my garage and I will never forget that hunting trip for as long as I live.