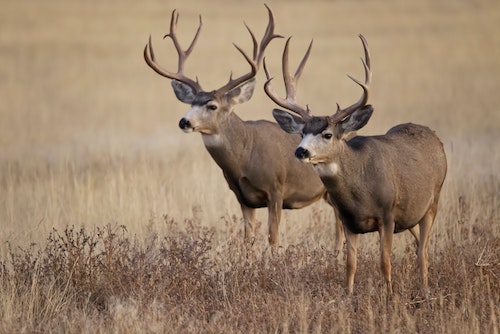 It was 5:30am and my alarm jolted me out of a slumber.

Today was the day!!

A few days earlier my brother, dad and I had boarded a airplane in Boston and flew to Denver CO. We met up with my uncle the next day to hunt mule deer.

I was very excited about this trip because I love Colorado and I love to hunt so what is better than combining the two.

We spent a few days scouting for a good mature deer to harvest. My brother was going to college next fall so he got the pick of deer. He obviously chose the bigger one which was fine with me because to me it’s not about the headgear it’s about the experience and joy of the hunt.

But anyway back to my story.

So opening morning we drove along a dirt road and rounded a ridge when we spotted a doe working her way up the ridge but she kept looking back so we knew there were more deer.

Sure enough a good 5×5 buck stepped out from behind the sage brush. We moved into position to make a good shot when my uncle gave me the thumbs up I took a deep breath, let it out slowly, then squeezed.

BANG! The 300 win mag jolted in my hands as the bullet sped 200 yards towards the buck.

We ran to my deer out of breath when we got there all I could do was stare at this magnificent animal and thank god for making such a creature and for the opportunity to take such an animal.

We don’t know how much the deer weighed but my uncle said it was one of the biggest bodied deer he had seen. While dressing the deer we found four bullet holes one in the heart two in the lungs and one a little far back.

It was the most amazing experience I have ever had and I will never forget this memory.