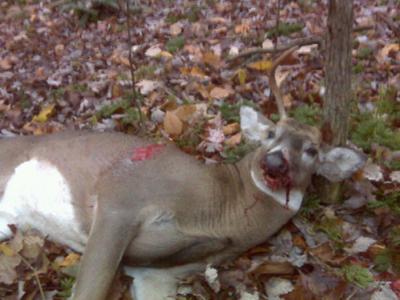 My half rack deer

It was early bow season and I’d been hunting bow season hard for about 3 years.

At this point it was October 17th and I’m sitting in a stand we had put up in the summer, about 3 months before bow season.

So here I am in my stand that night and I texted my cousin to tell him I was in my stand (like we always do).

About 15 minutes later, here comes this buck. It’s about 34 yards away.

I grab for my bow very slowly and I’m ready to shoot (I’m using a martin compound bow), it stops 34 yards broad side.

I shoot and as soon as I shoot I knew i had shot low.

The deer ran from the trail it came out of. I get down out of my stand about 15 minutes before I would any other time and I find my arrow, but no blood.

I’m bummed out on the ride home.

I tell my cousin about my miss. He keeps telling me it happens, it’s okay you’ll get another shoot at him and I’m just beating myself up about this deer.

I keep replaying it over in my head and its just killing me.

Well I had to go back to college so I didn’t get out agin until the morning of October 31st.

I get to my stand, I text my cousin and tell him I’m in my stand. He texts back and says to me, I feel that your going to get one this morning.

It’s just about shooting time and here comes the buck I had missed a few weeks before. This time he is even closer!

He is 15 yards broad side and stopped, feeding on some clover.

I grab my bow and I shoot and I feel really good about the shot.

He turns around and runs straight to the trail he came from.

He runs about 30 yards and stops and I’m sitting there thinking I missed him again!

But he stands there for about 1 min and starts getting shaky and falls over and right then and there. I yell so loud and say yes I got him!

It’s my first deer and I’m just so pumped right away I pull out my phone and I text my cousin and say I got him! and he says what?

I said I shot that buck that I missed a few weeks back!

And he says shut up, no you didn’t.

I didn’t care what he said, I was just sitting there so pumped up. I called my mom.

At this point I’m not being quiet, I’m just so pumped!

I get off the phone with my mom and I get a text from my cousin and it says if you really did shoot one don’t get up and push him away.

The reason he said that was the first year I was hunting, me and my cousin went out to cheek on our stands, we were going to go hunt these different woods during pre rut and rut.

We were walking into the woods and we seen a big 10 pointer with a doe so we backed out and we went hunting that night and we sat down and our stands were about 60 yards apart.

Here comes a doe and this buck running, we were only in our stands for about 15 minutes and here they come.

I stop this buck and I shoot and we find great blood and he was so excited for me we started tracking it right away and we ended up loosing blood after about an hour of tracking.

So back to my kill story, I text him back and said he’s down 30 yards from where I shot him!

I see him and he says yea right, stop messing with me. So I get down and go look at my buck and send him a picture, and all he says back is “nice shot”.

About 30 min later he texts and says he’s on his way. So he gets there and I’m taking him to my deer and he’s like you better have gotten one.

I’m not kidding, he thought one of my friends got one and sent me a pic or something.

So we get to my deer and he was excited, gave me a high five and he said great job, I’m proud of you!

He’s killed a lot of deer in the past and my great grandpa is the one who taught him how to hunt and he passed away about 2 months before the day I got my deer and my grandpa left my cousin his truck and this is our first hunt in this truck, so it was a really memorable hunt.

So on the way home we always drive past my aunts (his mom) work. So we put the head up so you can see it out of the truck.

My aunt works in town at a dry cleaners and she works right by the window so we set it up so she could see it when we drove by.

So we’re on our way home and we get stopped at the light right in front of her work and she looks out notices it’s us and waves and then looks toward the back of the truck and her eyes just light up and she smiles big and puts her arms out and kinda says who got it and I smiled and pointed at my self and she put her thumbs up.

We get back to my cousins house to hang up my deer and not 5 minutes after we get back, here she comes pulling up.

She got off work 2 hours early just to come home and see the deer. She gave me a big hug and said good job.

It was a happy day.