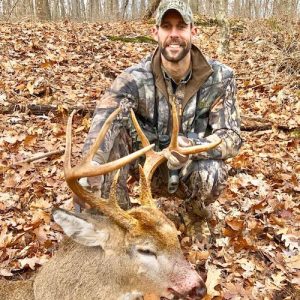 It was Jan 5th, 1400hr as I grabbed my gear out of my truck with lots of excitement!

Its the late season, fresh soft snow on the ground, crisp, cold 28 degree air being blown in my face from the North, “perfect” I said to myself.

Im about to stalk my way to a set of timber that I have planned to hunt for the past 2 months.

After scouting the area once again just 3 days ago with my father in a bitter, windy, snowing, cold, and awesome winter storm, I realized, the time is now!

This section of woods is ready to be hunted.

Its a thick, long barberry patch right next to an Oak ridge.

Its ideal bedding and feed in the thick stuff, and the snow is still soft and shallow enough for the deer to still dig for acorns… This is going to be a stalk hunt, no stand!

As I walked across the overgrown field approaching the woods, that 6th sense that every true hunter gets, jumped up at me! ”

Its going to be a good afternoon” I told myself.

Getting closer to the timber, my game face got switched on.

I suspected with the recent hard weather that the deer wouldn’t be traveling far, and that there was a good chance they would be bedded down close to their feeding areas.

Just about to enter the timber line, I grabbed my binoculars from around my neck and began glassing for any bedded deer.

A few more steps and scan again, and again. I was then about 20 yards in from the field when a pile of leaves beneath the snow crunched under my foot.

About 60 yards to the NE’ she stood up from behind a large windfall.

Luckily I spotted her before she turned my way, as I stood there like a Mossy Oak statue!

Then I saw the ears of her skipper poking up behind another windfall. T

he doe looked around, and a few flicks of her tail, “pheew ok, shes not spooked”.

She then turned and casually walked to her skipper and they both continued about 30 yards to the opposite side of a stonewall and began feeding.

Now I can only see an occasional horizontal line of a back, or the twist of an ear.

Time for the stalk!

Watching carefully through the binocs still, I watched for when I can move.

One cautious step at a time, tree to tree, bush to bush until I reach the perpendicular stonewall.

Crouched down as a straighten the peep site on my bow, I see the 2 deer walk past an opening in the wall 45 yards from me.

They then disappeared out of sight again, as the backside sloped downhill to a large Oak tree tucked in the corner of the 2 meeting stonewalls where that they liked to feed also.

I tell myself, ” now its really time for the “death creep” as the Benoit’s say”.

Attempting to step on only rocks and soft snow to avoid the crunchy ice where the ground had once been moist, I carefully continued to close the distance even more!

I used the techniques passed down to me that were now merely second nature movements, along with the maneuvers I still had to remind myself about.

After only about 3 minutes of “death creeping”, I spot the 2 walking past the stonewall opening again, but in the opposite direction, away from me. “Well, there they go, but that was still fun”!

Now only about 35 yards away from the original spot I planned to scan from.

I slowly continued on.

Just as I approached the small knoll where the 2 stonewalls made a ‘T’ I spotted another big Doe down in the thicket heading my way.

I took the last few steps I needed to reach my destination, then 2 more!

The Doe had 2 skippers with her and it seemed that they were heading my way!

They were, well, until they also decided to branch off and take the same route that the previous 2 had taken out.

Now looking through a 3 inch space between the rocks of the wall, I saw all the deer running back towards me!

I peaked over the wall just a few inches to see that there was a spike horn with only one side chasing them directly into the stone corner I was kneeling behind, as if he was a sheep dog, gathering his Does.

They were now only a mere 10 yards away from me on the other side of the wall running in circles.

About to draw my bow back and slowly stand up to pick a shot, of course the spike chased them 60 yards away in a flash.

I relaxed back and thought to myself, “this is awesome! I don’t even care if I cant get a shot”!

Sometimes there are certain things that we witness in the outdoors that make us realize, its not always all about the kill!

As I kneel there and watch this young buck struggle to control his sexual frustration, I looked back into the thicket, more deer coming!!

Soon they join the playground/ dinner table, some are jogging around, some browsing. Between peaking over the stone wall with one eye and looking through the little spy hole within the wall, I lost track of how many deer there were and where they were.

Then, Whoa! 15 yards to the side of me came 2 adult does jumping over the wall! In a pure reaction, my 70lb Hoyt came to full draw with such ease as if it were only 40lb, and I was looking at my 20 yard pin through my peepsite placed on the sweet spot of the closer doe!

The does stopped broadside in the thicket giving me no shot(of course) at about 18 yards, and 25 yards.

All I needed from the closer doe was about 2 more steps and she would be in an open shooting lane!

Why would she do such a thing!?

She stood there looking around for about 2 minutes before I had to let me bow back down due to a shoulder on fire.

I was able to do it when both does were looking away, and luckily I didn’t get seen.

They stood there for about 2 more minutes just gazing around.

The closer doe then took a step coming towards me!

In another split second reaction I was at full draw, almost in self defense now.

Somehow they had still not seen me kneeling there on the ground, nor come to full draw for the 2nd time!

She took a few more steps, now at the 15 yard mark, broadside facing the stonewall but with one huge stick covering her.

My pin was placed on her vitals the whole time as she walked, when she finally took that fatal step when there was nothing between my broadhead and her sweet spot, my finger touched off my release as if it had a mind of its own.

Before I knew it, I was watching my red lazer knock fly through the air in slow motion and then disappear into her.

As she bounded over the stone wall and I watched her spirit being released in the form of red drops onto the white snow, I felt the surge of adrenaline and energy involuntarily overtake my entire body as it flushed throughout my veins!

Yes some would say its only a doe, but she was still a majestic, proud, extremely strong willed, and amazing Whitetail Deer, and this was an amazing afternoon hunt!

I was able sneak into their home, at their level, and on their terms… which then lead me to the reminder:

This isn’t just something I do!

This isn’t just some hobby!

This is my passion!

This is my love!

This is my lifestyle!

This is what I live for!!