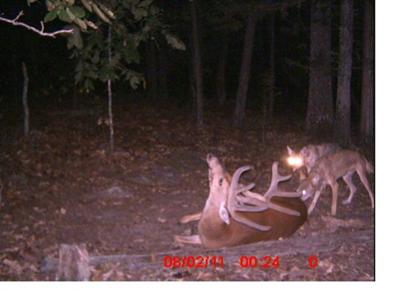 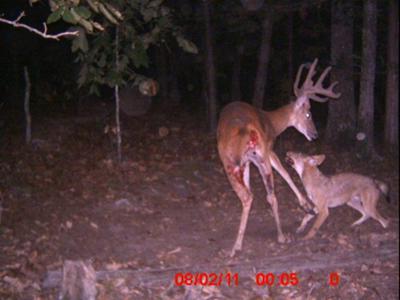 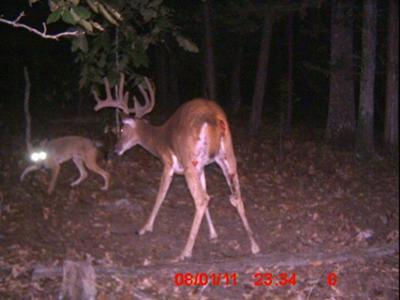 Yes coyotes eat deer, as you can see in the trail cam pictures above.

The photos attached to an email that I received on December 15, 2011 showing coyote eating deer and may look like a murder to some people. But to me the real crime was the subject line of the email.

It read, “This is why you kill coyotes.”

A seventh photo taken at 11:07am the same morning shows two turkey vultures feasting on the remains of the buck left behind by the two coyotes.

In the first few photos red blood stains on the hind quarters of the buck make it obvious that the coyotes have already wounded him Photo 401 – Wounded buck being harassed by coyote.

In the next couple of photos you see that the buck has decided to stop running. He has stopped to fight and make his final stand. He even tries to attack and kick a coyote with the hooves of his front leg Photo 402 – The buck attacks the coyote.

To me the scene is a natural one, as natural as being born, drawing breath, feeling hungry, eating food, wanting death and giving it.

The subject line of the email which I assume came from a hunter reminded me that many in the hunting community are just as intolerant of a coyotes right to kill deer as the non-hunting community is of a hunters right to do the same.

I am disappointed at the intolerance shown by hunters, but not surprised. Over the years, when it comes to a coyote eating deer, I’ve heard many hunters say, “kill them all.”

Coyotes of course have more right to the woods and deer than we do. Killing deer is not a way of life for coyotes like it is for hunters. It’s a matter of life or death. The big buck in the photos was in the prime of life. He was killed in full velvet in mid summer when the woods are lush green and food is plentiful and days are long and nights are warm.

Although the killing sequence on the trail camera lasted almost four and half hours those two coyotes may have run the buck all day. During that time they would not let him rest or eat which meant they also could do neither. The race between the deer and coyotes is a race between fear and hunger. It’s run daily many times in the woods and not just between deer and coyotes.

They ran that deer not just to tire him, but to overcome his instinct to survive by breaking his will to flee or fight.

They kill with something far more primal and powerful.

They kill with their hunger.

Hunters who shoot coyotes and walk over and kick them and then leave would respect coyotes more if they ran in that race, especially at night in the big woods or during winter in the deep snow. It wouldn’t matter which role they played or when they ran the race. They would be the loser every time.

This sequence of photos is also important for non-hunters to observe and ponder. Many will probably say, “That’s horrible. It upset me. I can’t look anymore.”

Coyotes can’t pay for the deaths of the animals they consume. They can’t go shopping on the meat aisle. They don’t eat every day. They only eat when they kill. No one asks a coyote, ”How would you like your steak done?”

Of all the ways that deer die in the woods, the way this buck died is not the worst. Starving to death takes much longer and means more suffering. Many deer that are hit by speeding cars and trucks crawl away with broken bodies to die long hard deaths without pain killers. For those deer the coyotes often become pain killers. Although coyotes know nothing of mercy, they provide it to many animals in the woods.

Of all the ways that deer die in the woods, the sequence portrayed in these photos is the most honorable.

The coyote has helped make the deer the wild animal it is. They have made it alert and fast. Maybe this is how deer repay coyotes. The buck eventually gave up and laid down for the coyotes, almost as if he was giving them his life, maybe as a gift, to acknowledge their contribution to his ability to survive.

Of all the ways that deer die in the woods, a bullet through the head seems the most merciful. If given the choice between coyotes and a bullet what would you choose?

And how do coyotes die in the woods? Sometimes a deer kicks a coyote in the face and breaks its jaw or a coyote breaks its leg while in pursuit. In either case the coyote starves to death, just like the coyote pups that it can no longer feed back in the den.

Once the killing process begins in the woods there is no intervention. Not god, not fate, not even humans can intervene and help the deer or the coyotes for that matter. Hunger and fear will decide who will tire first. More often than not, the coyotes tire and the deer just walks away.

It’s an extraordinary sequence of photos, not only showing coyote eating deer, but showing the truth about life and death in the woods. It should be a revelation on tolerance for hunters and non-hunters alike.

I forwarded the email to my hunting friends, but I changed the subject line.

It read: This is why you don’t kill coyotes or criticize hunters.

Yes, coyotes eat deer. In the beginning of this article, you can see pictures of a coyote eating deer alive.

Hunting coyotes is a very specialized type of hunting with calls and special gear, like the Best Hunting Binoculars.

LW Oakley lives in Kingston, Ontario and is the author of Inside The Wild, which is available below from Amazon.com

3 thoughts on “This is why you kill coyotes – Do They Eat Deer?”