How, When, and Where Do Deer Sleep? Answers To These Questions and More

There are many types of deer, and these questions will apply to most of them, but we will focus specifically on the whitetail deer sleep habits.

Many variables influence the sleeping habits of your local deer. Predators of whitetail deer, like humans and other meat-eaters in the wild, can have a significant impact on the deer’s daily schedule. Deer are very adaptable creatures, and they’ve been learning from their interactions with human hunters to improve their survival tactics over time.

Seasonal weather, storms, rutting, and hunting pressure can change where and when whitetails eat and sleep. We will take a deep dive into each factor that plays into the behavior of wild whitetail deer and thoroughly explore how different seasons and circumstances might change their sleeping habits.

Where Do Deer Sleep? 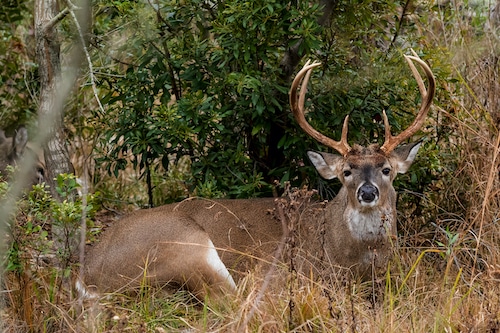 Whitetail deer prefer to sleep in areas they consider to be safe. Wooded areas expansive fields, ridges and benches are their primary choices. Not benches, as in park benches. Benches are terrain features. They are a flat area that is on a hillside, which will give them a view of their surroundings.

The bedding area is commonly close to water and food sources. The site will also likely have plenty of dense foliage to allow the deer to hide while sleeping, grooming, and chewing cud. When possible, whitetails will find high ground to improve their chances of seeing or smelling a potential predator in the area.

The deer choose dense cover for their bedding spots because humans will have difficulty reaching the area. While humans may not be able to enter and exit the bedding area, the deer ensure that there is an accessible escape route where they can get away from encroaching dangers. Let’s take a look at some of the popular places where you might find deer beds:

Whitetails are known as an edge species, meaning that they are commonly found where two different habitats meet, such as woodlands and open fields.

Where Do Deer Sleep at Night?

Whitetail deer spend a lot of time bedded down in their safe spaces. Many whitetails will bed in the same spot for long periods of time – weeks or even months – before finding a different area to bed down in. Many deer, including mature bucks, will typically have a separate nighttime area that they prefer to bed down in until just before dawn.

Through the night hours, many deer will leave the safety of their bedding areas in the thick woods, preferring to find open fields where they can find numerous food resources. The cover of night makes them feel safe enough to leave their thickets and move more freely.

Some deer may bed down overnight near or in an open field that offers an appealing range of foods. Hunters may find these beds in the middle of tall bushes, tall grasses or in low-lying dips in the landscape that provide adequate protection from potential hunters and predators.

Where Do Deer Sleep During the Day? 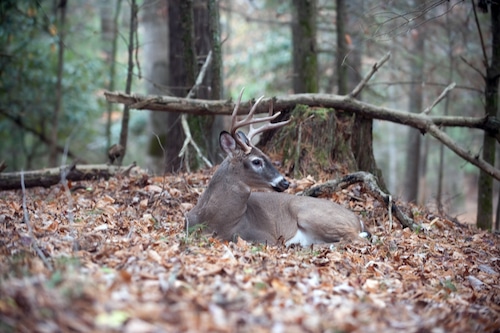 Many deer prefer to sleep in thick woods during the day. The wooded areas offer much more protection thanks to tall trees, fallen branches that provide cover, and even autumn leaves and broken twigs that become natural alarms that alert the whitetail to movement in their area.

The daylight bedding areas are carefully chosen by the whitetail. The daytime areas are often on high ground with good visibility and fresh air. In addition to these factors, bedded deer will position themselves so they can use the wind direction to their benefit and detect possible predators using their keen sense of smell.

Where Do Deer Sleep in Winter? 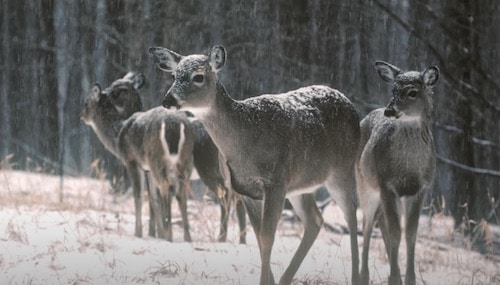 Unlike bats, bears, and box turtles, deer do not hibernate over the winter. Instead of curling up for a few months like some other animals, they will fatten their body in the fall to improve their ability to stay warm. Their coats will also become thicker to help insulate their bodies over the cold months.

Since deer do not hibernate, where do deer sleep in the winter? When the temperature drops, the sleeping habits of the whitetail deer will change. Now you will find deer bedding on south facing slopes where they can soak up the warmth of the direct sunlight during the day. They will also seek out evergreen thickets because the evergreens will provide shelter from the cool breeze in the winter.

Where Do Deer Sleep When It Snows? 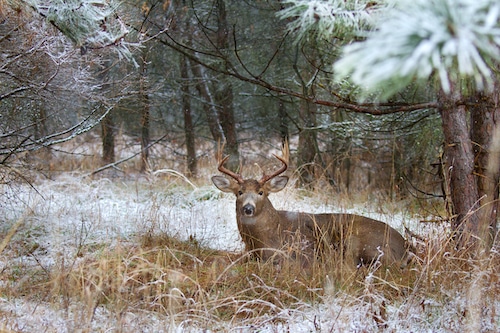 When it snows, you will find whitetail deer bedding in conifer thickets and under evergreens where they will have protection from the falling snow.

The animals want adequate protection from the most severe elements while still keeping accessible exit routes in mind should a predator find their beds.

The evergreen thickets also keep the snowpack to a minimum so the whitetails can conserve energy when moving about.

Deer are even known to use the snow around them to create a sort of protective nest if they can’t find better shelter in their region of activity that is still close to food and water. These determined creatures simply scratch and kick the snow out of their way and nestle down.

The video below of two young deer sleeping in the snow shows how they will dig to remove the snow and then lie down to sleep in the cleared area.

Where Do Deer Sleep When It Rains?

Unlike humans and some domesticated pets, deer aren’t put off by a little bit of rain. In fact, because rain can make it difficult for predators to track deer, the deer often take advantage of the rain to move a bit more freely.

Of course, every animal has a limit to what it can tolerate, so if the rain becomes a full-on downpour, the deer are likely to seek shelter. In the case of heavy rainstorms that interfere with the deer’s ability to see and smell their surroundings, the deer will often use coniferous trees or a standing field of tall crops as bedding spots.

Crop fields are especially protective as they provide a considerable amount of cover. These areas can be notoriously difficult for humans to hunt for various reasons, making fields an ideal hiding spot for deer. In addition, the crop fields provide food sources and easy access.

How Do Deer Sleep? 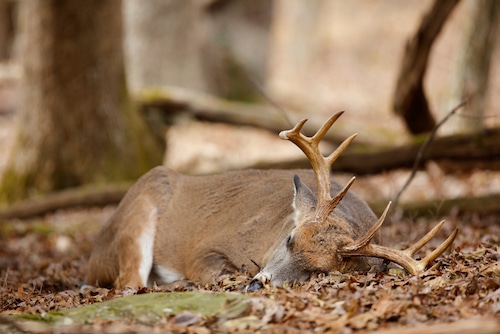 Deer sleep both on their own and in small groups. Some deer, particularly fawns and does, might need the proximity of their herd to feel safe. Other deer, like a mature buck, might feel comfortable bedding down alone and will even kick out less dominant bucks from their favorite bedding areas. Once they have found a safe and secure bedding area, the can be found sleeping in the same place until conditions change.

If you find a deer bedding area, you can examine it to learn more about it. The largest whitetail bed, approximately 50 or more inches, will belong to bucks. A slightly smaller deer bed, roughly 40 inches or so, belong to does, while the most miniature beds, less than 30 inches, are for the fawns.

The deer may urinate and defecate within a few feet or yards from their bed. Some have been seen standing in their bed before urinating in place and laying down again. The increased presence of scat and urine may help lead you to an active bedding area.

In terms of sleeping positions, usually whitetail deer sleep with an upright head position, eyes open, and with their legs tucked underneath their bodies. This position allows them to see, smell, and hear better while resting. Some sleeping deer will lay their heads down with their noses tucked under their hind legs and close their eyes for a few minutes at a time, but hardly ever fall asleep for any length of time. Others will lay down on their sides with front legs and back legs extended outward and may even lay their head down, but they never enter a truly deep sleep.

Some research even suggests that deer and other animals face a certain way according to the earth's magnetic field when they sleep!

In the video below you can see exactly how a deer lays down to sleep and chew cud.

When Do Deer Sleep?

These type of sleep patterns might lead you to believe the deer sleep most of the rest of the time during the day and night. It’s not exactly true, although a deer spends 70% of their days in bed. Deer actually tend to doze for a few minutes more than they sleep. The type of sleep that deer get is very different from that of a human because deer are acutely aware of their surroundings at all times – even when sleeping.

The deer tend to be on full alert at all times, which requires a much lighter sort of sleep. Light sleep in short intervals helps these animals hear and smell potential threats long before they become an immediate danger. Even biologists that dedicate years of study to the lives of deer, both in captivity and in the wild, can rarely say that they’ve caught a deer sleeping because the creatures are so aware of their surroundings.

Essentially, deer take very short naps throughout the entire 24-hours of each day on a cycle that depends on their surroundings, season, and weather. In between these naps, the deer may get up to urinate, defecate, and browse nearby foods before returning to their bed to chew cud or groom themselves before repeating the nap cycle.

The sleep cycle of deer consists of repeated naps that last from only 30 seconds to less than five minutes that are repeated over the course of 30 minutes to an hour. These animals know that they must stay vigilant to survive, especially during hunting season when hunting pressure can drastically change the behaviors of deer.

So, how, when, and where do deer sleep? Let’s highlight the most essential information covered here.

Areas that check all of these indicators are very likely to suit whitetail deer as possible bedding areas. Some bedding areas may present an increased difficulty for human hunters to reach, which helps protect the deer. These hard-to-reach areas will likely make sneaking up on the group of deer nearly impossible, which is why hunters set up stands to catch deer moving out of the bedding areas.

How do deer sleep? Most commonly:

While it might feel impossible to see a deer sleeping, it is possible to use their bedding areas for clues as to how many deer are in your area and what size they are. You can measure a whitetail deer bed to learn if your deer is a buck, doe, or fawn.

Whitetail deer are extremely cautious animals and will sleep when they feel safe and secure. There is no set sleeping cycle because these animals are a prey species. Prey animals must be vigilant at all times for self preservation. While deer are creatures of habit, they also know that habits have to change in order to prevent predictability.